Sweden has a unique global attitude to education that not many other countries share. I mean, it’s huge. Fantastic. The most fantastic thing you’ve ever seen in your life, believe me. They have free education, not only for themselves, but for everyone in the EU and EEA. They even have government subsidies and scholarships for students from High School up through University. It’s no wonder they have students who study, work and come back to study again. They really support education.

Studying in Sweden seemed like a no-brainer to me. Stunning country, beautiful people and free education. What more could you want? Snow? Culture? Choirs? Gasques? The odd thing is, no-one else I spoke to in the UK seemed to know about all the fantastic things available to you as a student in Sweden. When I initially revealed my intentions to move out here many people seemed to have the same question in mind – Why Sweden? I could give a simple, unarguable two-word answer – Free Education. The education is even in English! It’s incredible, right?

So why don’t more people opt to come here to study? Is it because Swedish education is poor? Not at all. Is it because Sweden’s dangerous? Definitely not. Moving away from home is hard, but is there really much of a difference between a 3-hour train journey and a 3-hour flight home? These days it costs about the same…

Patriotism? Nationalism? Maybe it’s because we feel obligated to remain close to home, encouraged to study in our own country, despite the increasing benefits of globalisation.  The cost of higher education in the UK is, for lack of a better word, extortionate. ‘Student finance’ is a bureaucratic nightmare. And, ultimately, charging for education shifts it from an inherent human right for humanities betterment to an elitist, capitalist and exclusive business model.

So how many people were aware that free education in Sweden was available to them? How many people realised this was something the British stood to lose in light of Brexit?

Many people’s noses feel put out of joint after Brexit, not only the ‘Remainers’ (or ‘Bremoaners’ as they were branded – people who oppose Brexit) but also those who feel lied to, those who feel like democracy doesn’t work, those who feel frustrated after the vote because they won’t be getting what they thought they voted for. I’ve read analysis after analysis as to why the Brexit vote was not the will of the British people. I’m not here to say whether it is or not, but a simple majority vote for a long-term constitutional change is uncredible. This was not a vote for 5-year leadership, this was a constitutional change. This was not a dialectic, this was not rational reasoning, this vote was guided by pathos rhetoric. The entire dialogue leading up to the vote felt like the two sides of a decision whether to leave your spouse. My spouse has changed over the years. I have so much to offer others. If only I wasn’t bound by the rules and regulations of my household, the things I could do. I don’t like that they buy French cheese. Also, why is it that they only want curvy bananas? I barely recognise them anymore, why can’t they look like they did 50 years ago? The US and India have been giving me the eye. Many others are interested in me. What about change…

Unfortunately, many outside the UK feel shunned by the decision, and rightly so, they’re on the other side of this divorce settlement – the cheated-on spouse. The rhetoric on this side swings from Oh, I had no idea you felt this way about us, are you sure you don’t want to change your mind? to You’ll never get what you want, I’m taking everything, you can go to hell. The friends of this hypothetical family (the non-EU countries that are still a part of Europe) are not flocking to side with the UK and its new seedy partners. No, quite the opposite. I wasn’t going to mention Trump in this article (but I guess I just have so I’ll continue). Nor was I going to assign genders to either the UK or the EU in this hypothetical (but it works better if I do, so here goes).

Imagine your Mum left your Dad and her new boyfriend is Trump. She now depends on him a lot, both financially and for security (security from what you ask? Good question) so much so that she is thinking about marrying him. But, she still wants your Dad in the picture. She wants all the benefits of being married to your Dad: the financial support, the friendship, the sex. But she doesn’t want to be tied down or compromise. She wants a friendship with benefits. Now, anyone who has ever had a ‘friends with benefits’ type situation knows that it never works with an ex. People get hurt. There are sore feelings. Jealousy from both sides. As a child, you’re going to question your Mum’s decisions. As a friend, you’re going to question if they’re as hot on the market as they think they are. Delusion can be a fickle thing.

Some like to dream there’s a way out of this, a theoretical undo button. Others want to ‘punish’ the UK. Michael Moore put it to Britain to ‘enjoy your miserable life on your island’. Obviously, if 100% of the population wanted to leave the EU then I think they’re quite right in their convictions. Unfortunately, that’s not the case. In fact, the people who stand to lose the most are the Millennials and Gen-Z (or iGen who, coincidentally, were not eligible to vote). They are the ones who stand to lose out on free education in Sweden, freedom of movement in the EU, more varied job prospects and a more integrated society. As luck would have it, they were also the demographic that were most in favour of remaining. 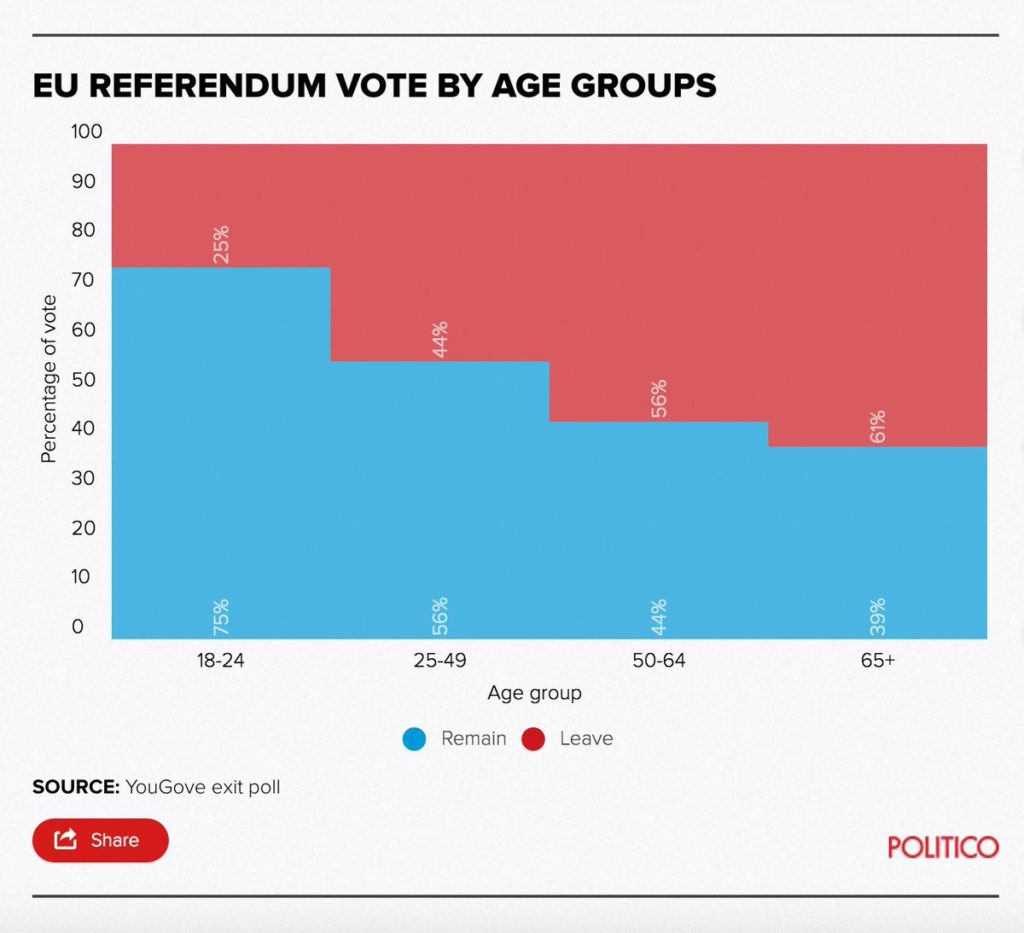 There’s one big problem with the Brexit vote that I can’t shake. It’s an unfortunate but important thing. Brexit had the potentiality to be used as a protest vote for any kind of political discontentment. Putting this power to the people meant that any unhappiness (and I mean ANY unhappiness) with the political system could have triggered a reaction for ‘change’. The truth is no one is ever happy with the political system as it stands. There is always room for improvement.

Despite feeling hopeless, there’s always a light at the end of the tunnel – and someone recently shed some light on my current fears. I met the vice inspector of my nation. He asked me about myself. When I told him I was here to make use of the free education in Sweden before Brexit happened – he had a hopeful message. Other non-EU countries in the EEA can still benefit from the education systems in Sweden, with any luck, the UK will have the same arrangement. Logically it makes sense, but I fear the world is becoming less and less logical and any child of divorce knows that divorce tends not to be logical at all.

As for the future, well… we will just have to wait and see.