A Crash Course in Bandy – By Simarjit 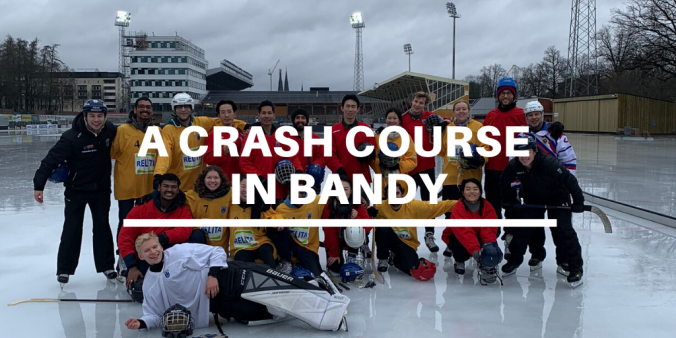 “Bandy is a team winter sport played on ice, in which skaters use sticks to direct a ball into the opposing team’s goal.”

This has to be the most cliched way to start a post. Unfortunately, considering how I and many others who might be reading this post are not familiar with this word, I felt it was worth a shot. So, what is bandy? Well, it’s basically like ice hockey. And if you come from a place where ice hockey isn’t all that popular (Like India, for example), imagine field hockey but on an ice rink instead of a field and all the players wear ice skates. Oh and also, there’s a ball that you play with, in Bandy instead of a puck, like in ice hockey.
To be honest, I can’t explain the game in-depth since I am not familiar with it all that much. Or am I? Well, that is what I’m here to talk about. Up until a couple of days ago, I had no idea what the word ‘Bandy’ meant. That was until I got to know about the crash course in Bandy that was jointly organized by Uppsala University and Sirius Bandy, Uppsala’s bandy team. If you’re like me and have no experience in skating or in playing hockey, the combination of skating on ice while playing hockey must seem quite horrifying.

However, I wholeheartedly suggest you give it a shot. When I heard of this crash course, I had similar reservations. “I don’t know how to skate, let alone ice-skate!”; “I’ve never played hockey before!”; “How can you teach someone to ice-skate within a month?!?” etc. But honestly, it was fun!

So this is how it works, the crash course is divided into the following components:- 4 one-hour lessons and a final match. The lessons, as well as the match, takes place on weekends so everybody can attend. On the first day, you are given a hockey stick, a pair of skates and a helmet. Remember to take a picture since you’ll be using the same equipment for the whole course. At least that’s the way it is recommended. You can always change it if it doesn’t suit you.

Day 1: You’re divided into two groups; the ones who have some experience in skating and the ones who won’t. If it’s not evident by now, I belonged to the latter group. The first day is all about posture and balancing. I advise anybody who is planning to take up this course to listen to the instructors very carefully, even if your instincts tell you otherwise. For example, the instructors told us to lean forward with our knees bent. It was quite weird as keeping my legs straight and stiff was helping me balance more. But soon, I realized why the instructors were asking me to do otherwise. Ice is hard, keeping your legs straight puts a lot of burden on your knees and soon, my legs and knees started to hurt quite badly. Also, while maintaining balance when you stand can be easy, when you’re skating, it turned out to be easier to maintain balance with the knees bent. Once you get the hang of it, it is quite something. It’s almost like gliding through the air. It’s really fun. Also, it’s always better to fall forward instead of backward since it’s easier to control a forward fall. So another tip: When you feel like you’re falling, try to shift all your weight forward. You may end up controlling your fall in the worst-case scenario, and not falling at all in the best-case scenario!

Day 3: By day 3, people are starting to get more comfortable on skates. So the instructors teach you certain exercises to help practice maintaining your balance. Like going into a squat position while skating and coming back up again.

Day 4: By this time, almost everyone is pretty comfortable with being on ice so it’s mostly just a fun day of skating and playing some bandy

Final Match: The moment of truth. Everybody’s divided into two teams and there’s a proper Bandy match between the two teams.

All in all, the whole experience was really fun! Also, it can sound a bit daunting but it was really fun. The players at Sirius bandy are awesome and it was really fun chatting with them about their experiences, how they got into bandy etc. They were also really helpful and gave really good tips on how to skate properly. Unfortunately, on the day of the final match, it was windy and wet, so skating was a bit hard. But it was a fun sight, people falling on top of each other while trying to goal. If you get the opportunity, I highly suggest that you take it. They only admit limited students every year and its first-come, first-serve. The applications open around December and the course starts in January and lasts until the mid of February. It is completely free of charge!

You can find some pictures and videos of the course below.

Nigerian Foodie in Uppsala – By Margaret

The Online Challenge – By Margaret Aligbe