Ahhh yes, Rackarbergsgatan. Also known as Rackarberget (if you’re referring to the area that it’s in, pronounced “racka-berry-it”), “Racka-something” (if you’re an exchange student who has just arrived and have no idea how to pronounce that beast of a word), “Rackies” (if you’re Australian), or just plain “Racka” (when you’ve given up). 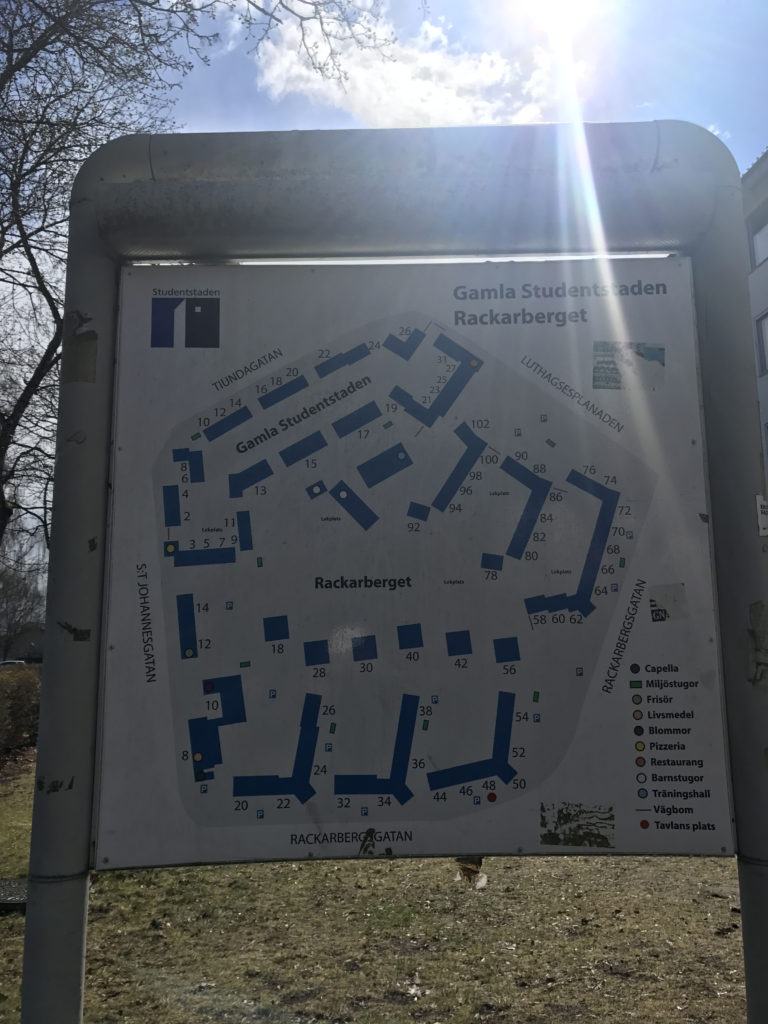 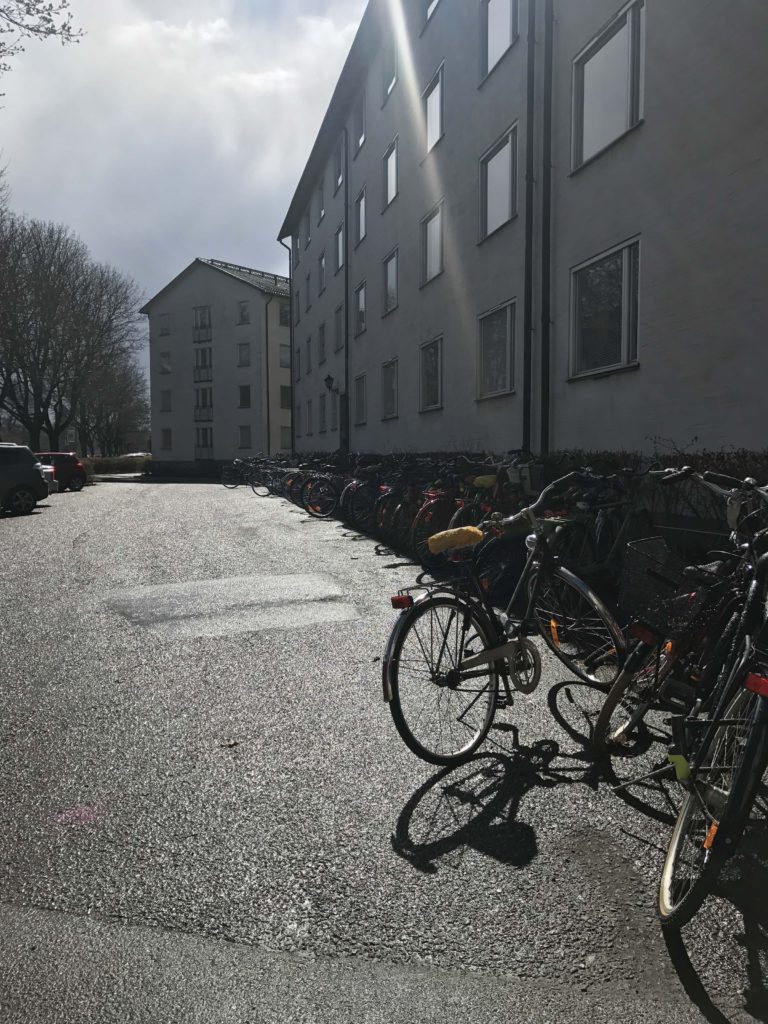 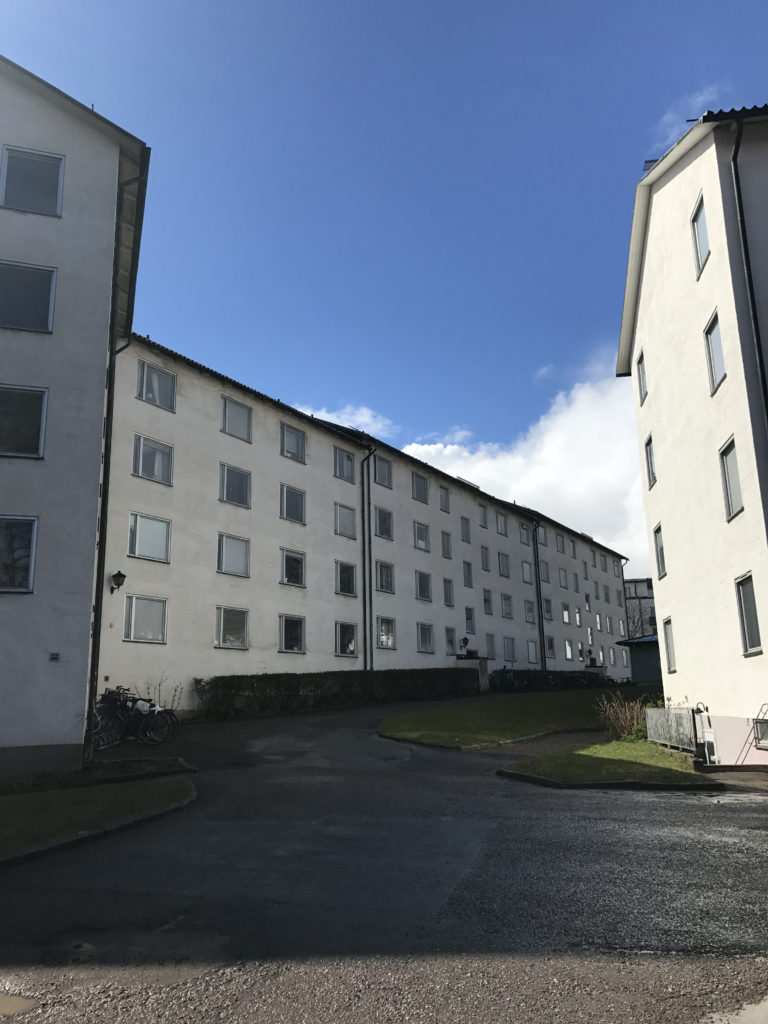 Location:
Hands down, the best thing about Rackarberget is the location. Here’s about how long it takes me to get to the important places:

And one of the best things that I’ve just recently discovered about Rackarberget is its proximity to Ekonomikum park. It’s a nice open field with a lot of room to picnic with friends and soak up some sun, and it’s where a good portion of Valborg takes place. This ended up being super convenient during Valborg for me and my friends, because we could just use my room as a sort of home base for the weekend. My friends came over in the morning and brought all the things they would need for the day (food, drinks, extra layers of clothes) and we just brought what we needed to each event, since it’s much closer to the city center compared to Kantorsgatan and Flogsta, where they live. 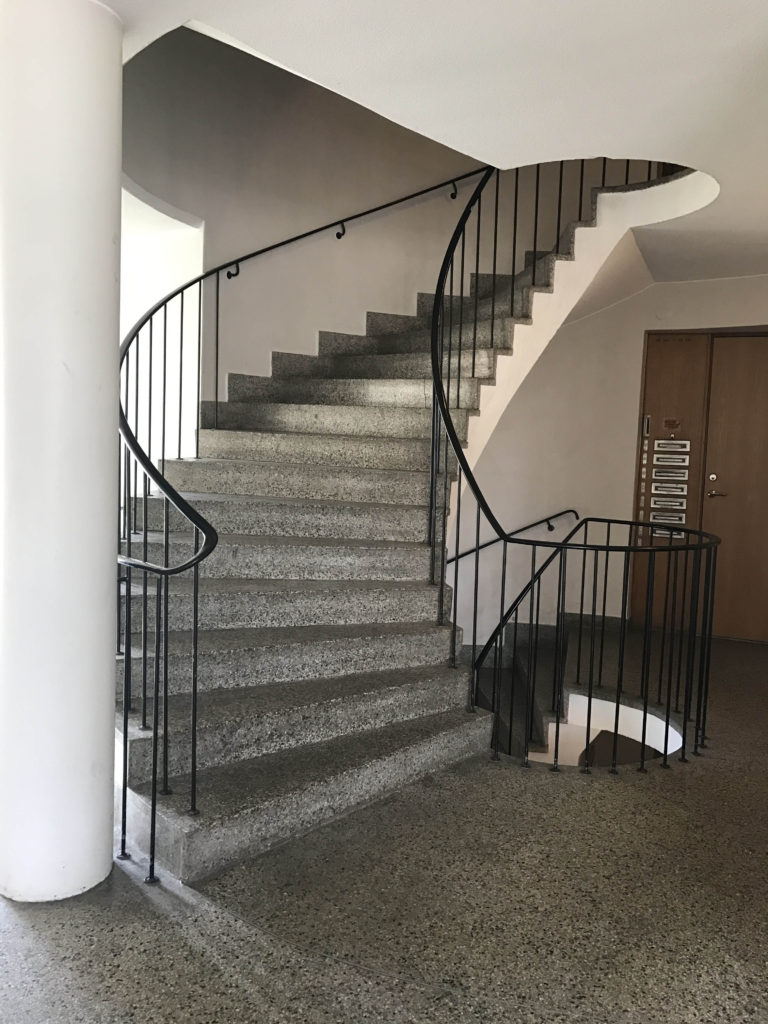 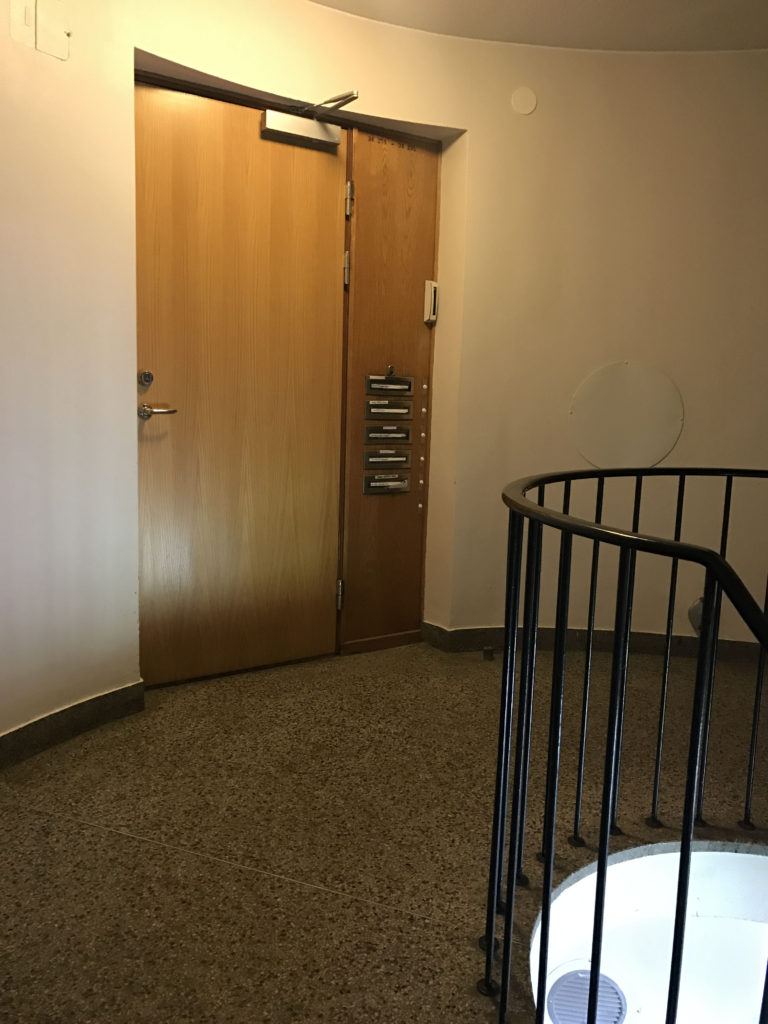 Of course, the downside of Rackarberget is that you have to share the bathroom and shower. Some corridors in Rackarbergsgatan house five people, and others have seven, like mine. You’d think that sharing a bathroom and shower with six others would be a disaster, but it actually works out just fine. We’re all on our own schedules, so it hasn’t really been an issue. 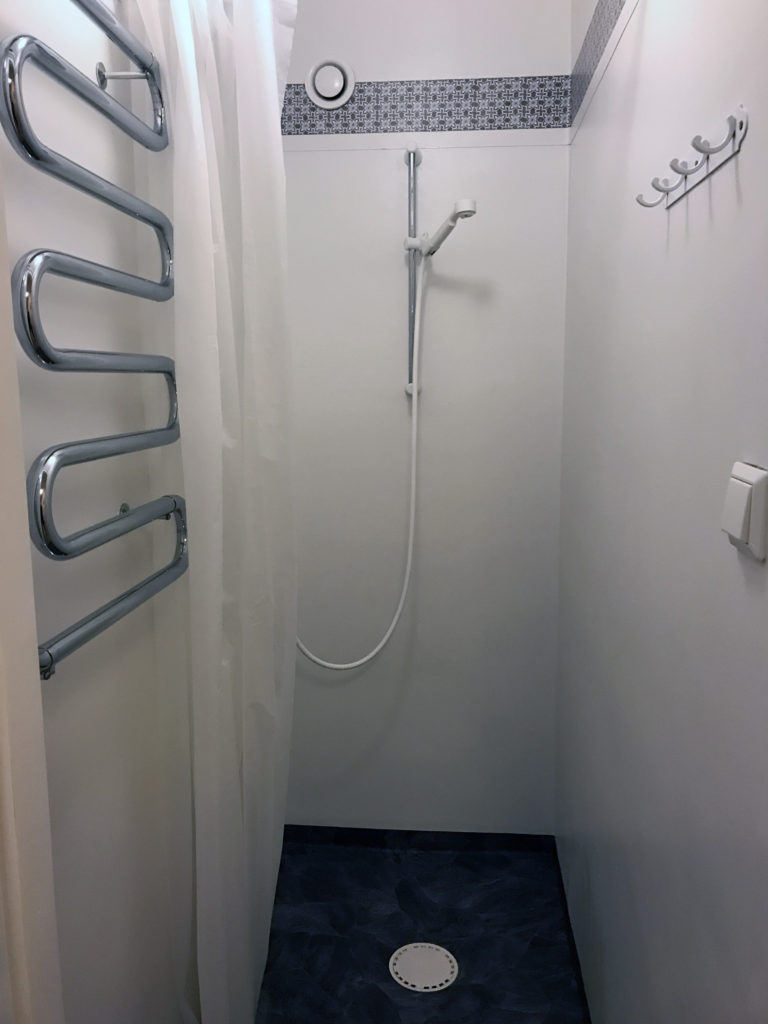 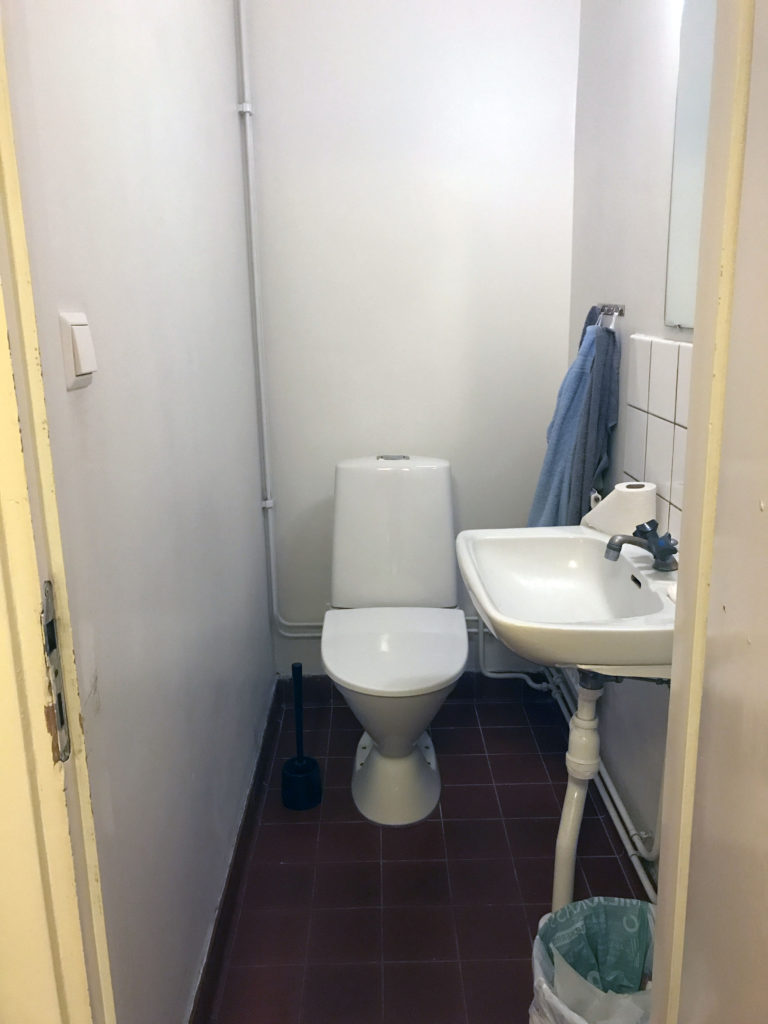 As for cleaning, we just rotate chores each week, like cleaning the bathroom/shower, taking out the trash, tidying the kitchen etc. 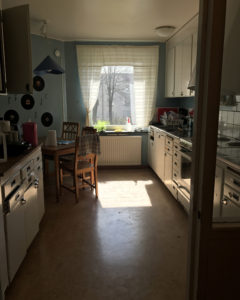 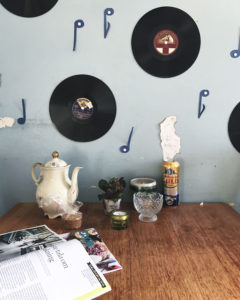 Big window, nice lighting during the day, and pretty well stocked with cooking necessities, like a coffee maker, toaster, pots and pans and such. We share our utensils and most of our dishes, and then have a cabinet to keep our personal food. Sometimes our schedules will clash when cooking, since there’s only four stovetops and one oven, and most people eat around the same times. But it hasn’t been that big of a deal.

One thing that I don’t really like about the corridors in Rackarbergsgatan though, is that the kitchen is a bit small if you want to have more than four people sitting and eating at the table. And on top of that, there’s really no communal living space where we can have a couch or something, like there is in Flogsta. Because of that, there’s not really any place where everyone in the corridor can just hang out. So, most of us just end up going to our separate rooms at the end of the day or after cooking dinner, which can be nice after a long day, but it would be nice to have the option of just hanging out somewhere besides your own room.

Rooms:
The rooms are pretty decent though, especially given that it’s on the less expensive end relative to the other residence buildings. I do have my own sink, which is convenient, ample closet space, and a desk and chair, shelves, armchair, bed, and my favorite part– the big window. It’s not the most spectacular view or anything, but I love the fact that it lets a lot of light in, and fresh air too if I want to open it. But the view’s not bad either. Here’s a picture I snapped during sunset, while the days were still long: 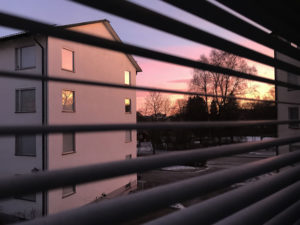 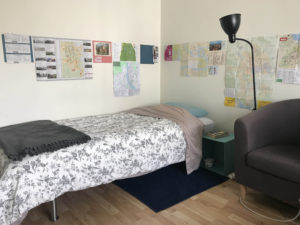 As for decorating the room: at first, I really didn’t feel all that motivated to put anything on the walls, since I knew I would be leaving in five months and didn’t want to spend money on things that I would have to get rid of at the end of my stay. But then the plain walls got boring. So I decided to put up some of the free maps that I had gotten from my travels, and just other small, barely sentimental things that I had accumulated and would probably get rid of anyway, like ticket stubs, receipts for train tickets, etc. It added some nice color to my room, and since I put everything up chronologically, it turned out to be a nice way to document my time abroad.

Overall:
Overall, I’m really happy I ended up in Rackarbergsgatan. I don’t even remember if it was my first choice when I listed my preferences in the housing application, since it was all a blur and all the names were so long, but I am really satisfied. The location is great, it’s not boring, but it’s not too rowdy either. It’s definitely not Flogsta, but that’s also nice too because, well, it’s not Flogsta 😉
/Su Fang