ICA is one of the grocery store chains in Sweden, and arguably the most popular amongst students. During your first few days in Uppsala as you begin to settle in, you’ll probably get hungry, and need to make your very first trip to your neighbourhood ICA.

My first few trips to ICA were a lot like a game of jeopardy, I wasn’t sure what I was going to come home with, and it took a few tries until I got it right. ICA Folkes Livs in Rackarberget was my first experience with grocery shopping Sweden. One of the first things you see when you walk in is a colourful wall of candy, or as Swedes call them godis. I thought ok well if Swedes love sweets so much living here won’t be hard at all. As you turn the corner, and approach the refrigerator section that is when things got a little more challenging. Since everyone in Sweden speaks exceptional English, this is when the language really hit me. I found myself taking 10 minutes just to pick out some butter, and milk just because there were about a million options. Google translate, and currency converters became my best friends during every grocery trip. Since the store is so narrow, and busy, people were trying to squeeze by me, I got a little overwhelmed and decided to try out a game of jeopardy. I just grabbed items that looked the most familiar based on the pictures, and few Swedish words I knew, and hoped for the best. For the most part it turned out pretty well but for others not so much; for instance I came home with rice pudding instead of yoghurt. Most yoghurt in Sweden comes in tetra packs much like the milk containers instead of the individual packs I’m used to back home so I figured how could that possibly be yoghurt, and opted for what turned out to be rice pudding. A friend of mine accidently ended up buy filmjölk or sour milk for her morning cereal. Just ask any international, and their guaranteed to have a great grocery story. 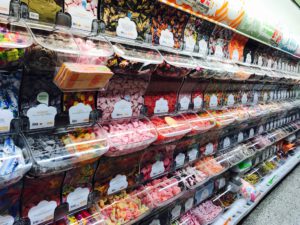 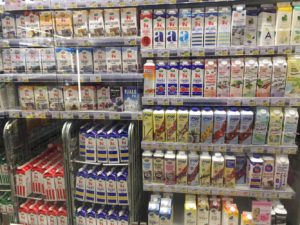 Another challenge I faced was the prices. One Canadian dollar is nowhere near one Swedish krona. Dividing by 7 was a challenging task, and I ended up just using a conversion app. It took a while to get used to what the Swedish krona system actually meant as when I read some of the prices, I wondered how on earth could milk ever cost $40?! Why is does my total come to $150 when I only purchased a few things?!… right this is the Swedish krona we’re talking about, and in my mind I thankfully just saved a lot of money.

Luckily in Sweden, grocery shopping is fantastic for people who are lactose intolerant or have other dietary restrictions. Two of my friends are lactose intolerant, and they have so many milk, yogurt, and ice cream options compared to back home in Canada. Another friend of mine is allergic to peanuts, and found the phrase “kan innehålla” meaning “may contain” a very helpful phrase.

One of my greatest tips when grocery shopping is don’t be afraid to ask for help. It’s normal to want to feel that sense of belonging, and try to be as Swedish as possible when you first arrive but Uppsala has many international students who are all in the same position. The swedes are beyond helpful when you ask them which will make your experience a little easier.