I arrived in Uppsala less than a week ago and I’ve had to get accommodated quickly!

Day 1:
Landed in Arlanda Airport and tried to buy a train ticket from inside the airport. No luck, the machines only sell tickets to Stockholm. Once outside the airport I found a tourist helpdesk, they directed me to the main train station where I bought a ticket to Uppsala from a big yellow machine. Train time – around 20 minutes.

Arrived at Uppsala train station. Luckily my UK Sim card has no roaming charges so I used google maps to find the best route to my new home (either no. 2 or no. 3 bus to Kantorsgatan). Took money out at a cash machine only to find that the bus machines accept solely card payments. Bought my bus ticket (aware that the cost of the bus ticket was less that the charges that would be applied to my overseas card transaction) and hopped on bus number 3 with my luggage in tow. After arriving it occurred to me that the ticket I bought at the train station may have applied to the buses as well, but it was too late.

My new room: big, bare and grey/white. How much more student-y can you get? I have a shared apartment with one other person who, as I later found out, had been living there alone for 4 months prior to my arrival. I had no internet, kitchenware, sheets, blankets, towels, study materials, food and limited toiletries. My classes in Basic Swedish started the next day. I had to register. I had to get items. I had to get food. I had to get to know the city. I had to do all this relatively quickly.

A few hours and a few bus trips later and I had some food, information from the University, paper and pens, a blanket and a little more knowledge about Uppsala.

There are so many flies in Uppsala.

Day 2:
Introductory class to Basic Swedish. Easy to find, helpful, awkward. The first day of class if always awkward. Talk to others or spend time on your phone? I did the latter, but only because I was trying to figure out where I could buy towels after class. I made a shopping list. I half-listened. They told us about tours, Nations, the fact that help was limited right now because most of the staff were on holiday. We got all the information in person, in our welcome pack and by email. Somehow, we always forget or lose track. The information is still never where you need it when you need it.

They told us Summer only lasts 6 weeks in Sweden. Maybe that’s why there are so many flies around right now.

After class, I ventured out to IKEA, around 40 minutes by bus. I bought as much as I could carry: pillows, towels, sheets, patterned fabric, a bin, a rug… I was unsure about the rug, it was quite large, but it was nice and it was cheap (200kr), so I bought it too.

When I tried to get on the bus the driver said something to me in Swedish (something about ‘matten’) I thought he might have been saying I couldn’t take the rug on the bus, but when I replied ‘sorry, pardon?’ in English he smiled and waved me on. Same as anywhere, there are nice bus drivers and not-so-nice bus drivers.

Now my home was starting to feel like home. Every hour I scanned the FB group ‘Uppsala University buy and sell’. Occasionally I could bulk buy items 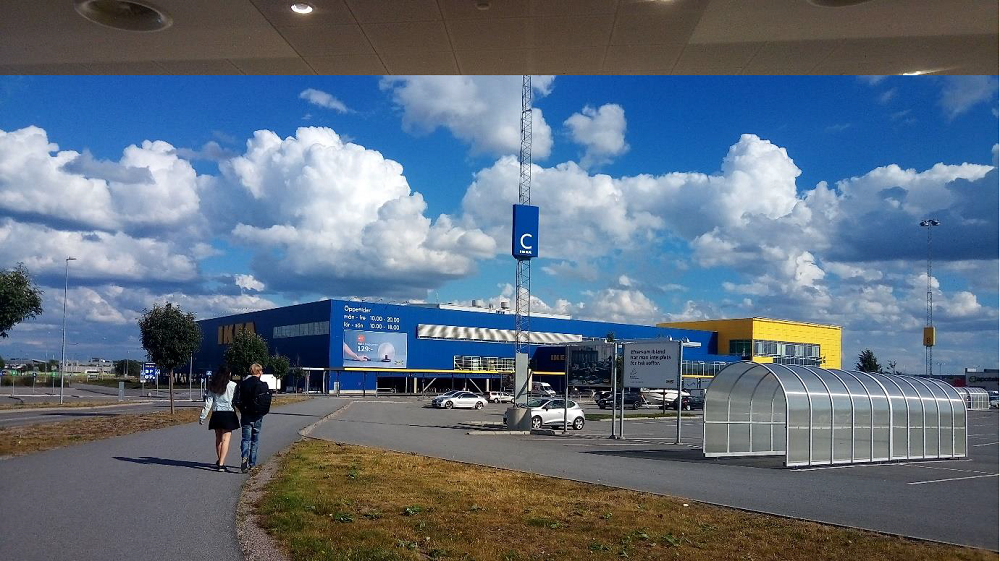 Day 3:
Classes continued and, naturally, friendships formed. I was a master’s student in a group with other master’s and PhD students / academics. Two days in and we were already quite talkative. After class I tried to buy tickets for the group tours, but the card machine wasn’t working. We only found this out after waiting in a queue for 40 minutes. So, shopping instead, this time for clothes and a frying pan. Every time you think you’re set up, you think of something else you need. I kept scanning ‘Uppsala University buy and sell’ for used bikes. I needed a bike. I really needed a bike.

That night I researched the student nations. To get a student card you need to join a nation. There are 13 to choose from and I wasn’t taking the decision lightly. I made a list of pros and cons for each. I considered their libraries, work opportunities, size, parties, clubs, pubs, food, gasques, sports teams, history, websites, Facebooks and, ultimately, whether they seemed open to accepting international students. I narrowed it down to three relatively small clubs and made my final decision.

My student card was on its way. 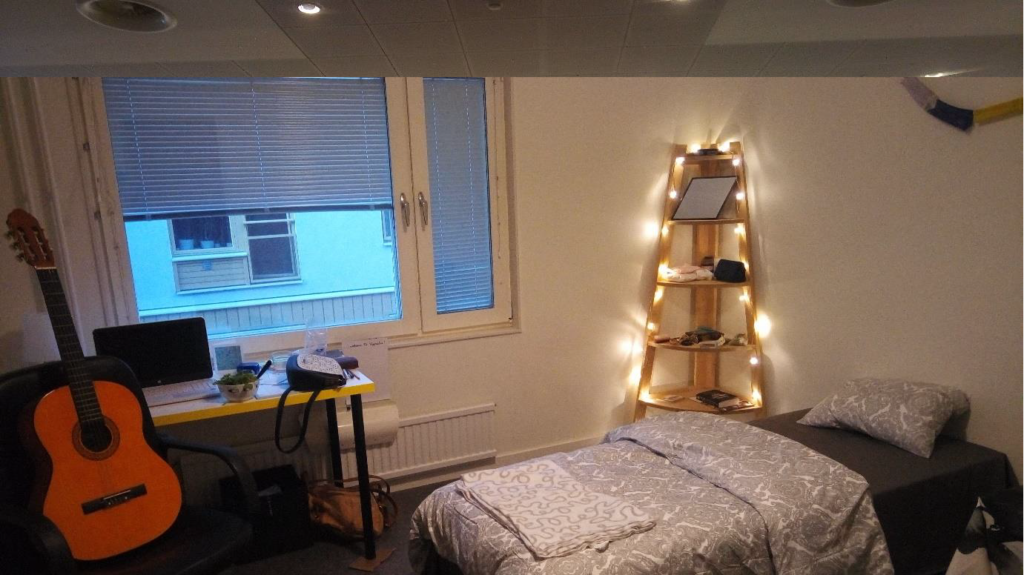 My room once decorated

Day 4:
Bike, bike, bike, bike. I still needed a bike. The 35-minute walk to campus seemed longer considering the possibility of a bike. After class, I went again to buy tickets for the group tour. Unfortunately, Stockholm the next day was fully booked and it was Stockholm’s pride parade. What a day to go. I joined two classmates for a Chinese Buffet lunch. There’s a big Asian presence in Uppsala, I can hear people all around the City speaking Thai, Hindi and Mandarin, not to mention the copious Indian, Chinese, Thai restaurants and massage parlours.

It’s nice, it’s diverse, everyone seems happy and friendly. I think I’m going to like it here.

Oh, and I finally bought a bike – from Bibblans Cycle shop. I bumped into my Swedish Professor in the shop who encouraged me to get one without hesitation. ‘You will need one’ he assured me and reminded me they cycle on the right here.

What happens when you cycle in Uppsala in the summer? You get a healthy diet of flies.

Top things to remember:
1. Make sure you have an EU sim with credit on arrival, otherwise get a Sim ASAP – the University welcome pack has a Sim included, so if you can make it there first it’s helpful.
2. Get a flight in the morning if possible, your first few days will be busy, but your first day especially busy.
3. Join ‘Uppsala University buy and sell’ Facebook group.
4. Be prepared to spend a lot of money on arrival.
5. Buy a bike ASAP with a very good lock.
6. Join a Nation.
7. Make sure you have a card you can make Visa/Mastercard payments with, some shops don’t accept cash and getting a bank account here is a lengthy process.
8. Be friendly, walk around and get a lay of the land. It’s not a big City, but it’s beautiful and it’s your home for now!