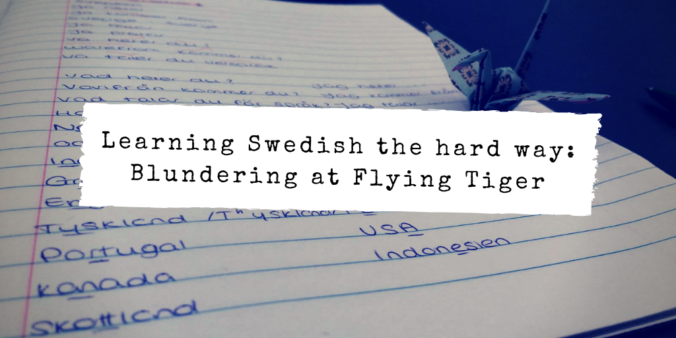 Learning Swedish must be the most common resolution among international students. However, like any language, Swedish comes with a wide range of possibilities to make mistakes. Blundering your way through learning  a new language may be very awkward, but it might also be the most efficient way to learn. Not only because you will forever remember your cringe-worthy mistake, but also because you will tell your friends about it, repeating what you should’ve said (or, like me, write a blog about it, for the whole world to know).

My most awkward Swedish situation so far happened at Flying Tiger. For those who don’t know: it’s the ultimate store for everything you need in your students room, that you forgot at Ikea and don’t want to go all the way back for. Can openers, laundry bags, those kinds of things. I had gathered a pile of stuff that I did or didn’t need and went to the counter to do what I usually do: pretend to be Swedish (and pay, of course). Pretending to be Swedish starts very easy: you put the desired articles on the counter while you say “hej hej”, in a high pitch voice, the first ‘hej’ a bit higher than the second. The cashier will scan the items and ask something that most likely means “do you want a bag?”. Usually I take my own bag, so I politely decline saying “nej tack”. However, this time I was unsure whether the cashier asked about a bag, or about something else. The only way to solve it was to drop my incognito Swedish identity and ask “wait… that means ‘do you want a bag?’, right?” Polite as the Swedish are, the cashier apologised for speaking Swedish, to which I replied that I was trying to learn Swedish anyway. He explained to me that ‘påse’ means bag, and asked in Swedish whether I wanted a ‘kvitto’ (receipt). Of course he had to explain what ‘kvitto’ means as well.

I meant to go to the office supply shop next door to get tape and batteries. Unfortunately, they only had super-sticky-double-sided-invisible-magic-tape, which of course costed ten times as much as regular tape. Therefore I decided to go back to Flying Tiger, which at least put me in the position of practising the words I had just learned. Of course I ended up at the same counter as before. The conversation (IN SWEDISH!) went quite well, until the final moment when the cashier told me to “har en bra dag”. Now, I knew what these words meant, however, what is tricky is the Swedish intonation: the Swedes tend to sound surprised with everything they say. Therefore my brain decided in a split second that the cashier had asked me whether I had a nice day, and I promptly blurted out a very loud “ja!” (in my defence, it had been a very nice day). Slightly embarrassed, the cashier politely explained to me that he actually had meant to wish me a good day.

Walking out I got a text from my housemate. “Since you’re there, could you bring me a stapler?”

“Nah man, I just walked out the second time. If I go in again, the cashier will either think I am very dumb, or madly in love with him”

The first weeks at Uppsala University: Diving into the student life – By Anne