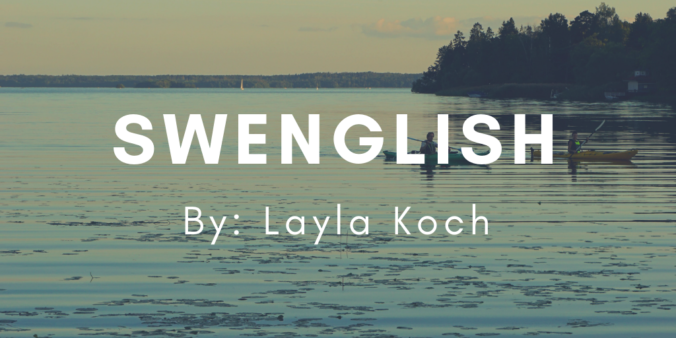 Swedes are, undoubtedly, very good at English. In fact, Sweden is the fourth best country worldwide in terms of non-native English skills following Norway, the Netherlands, and Denmark according to Education First. However, to err is human, even among Nordic countries. The funny mistakes Swedish native speakers make in English have coined the term ‘Swenglish’ (or ‘svengelska’ in Swedish). But what is Swenglish? And how can you spot a Swenglish speaking person?

Swenglish is, as the name suggests, a mixture of Swedish and English. More concretely, it is English (a) spoken with a Swedish accent and (b) influenced by Swedish grammar and idioms. So, let’s have a look at it!

And, just as a disclaimer: By writing about Swenglish, I am of course neither trying to diminish Swedes’ English abilities nor boasting about my own. I am part German and can assure you: Denglish is much less charming and much more ridiculous.

Pronunciation
If you’ve ever tried to speak Swedish, you may notice there are some sounds that are so difficult, they make you want to cry: words such as sju (= seven) or sked (= spoon) or stjärna (= star). For a non-Swede, these words are very difficult to pronounce. However, there is still some justice left in this world, which means that vice-versa there are also some words in English which Swedes find difficult to pronounce. We are talking about words with a J or a CH.

The English J sound, as found in jail, joke or Jew, is not part of the Swedish language. Instead, Swedes pronounce it as Y: A Swedish Julia will prefer to be called Yulia. This is often transferred to English turning jail into Yale (what an upgrade!), joke into yolk as in an egg yolk, and Jew into you.

Another difficult sound is CH as found in choose, cheap, or chit chat. Since this is also a very uncommon sound for Swedes, they tend to pronounce it more softly as a sh. That turns choose into shoes, cheap into sheep, and – my absolute favorite – chit chat into sh*t shat.

But then again, if you ask a non-Swedish native speaker to pronounce sjuksköterska or just Kristianstad, they will probably rethink their life choices.

Grammar / Idioms
As Germanic languages, Swedish and English are in many areas similar. However, there is some small differences, which make for funny mistakes.

One grammar issue I often notice are words that have several meanings in Swedish but not in English. Examples for this are ‘rolig’ which means both ‘fun’ and ‘funny,’ ‘lära’ which means both ‘learn’ and ‘teach,’ or ‘låna’ which means both ‘lend’ and ‘borrow.’ This can be a bit confusing to foreigners when you have a funny roller coaster, lend my book, or learn me how to spot a Swenglish speaking person.

Idioms, on the other hand, are always tricky when speaking a foreign language. There is so many weird sayings in every language, which everyone thinks are normal, because they grew up with them, but which are so random. Nonetheless, this leads Swedes (and many other nationalities) to use their idioms literally translated in English. Some of my favorite Swedish sayings translated to English are “Everyone knows the monkey, but the monkey knows no one” (= being known ≠ being popular), “You’re burning fires for cows” (= you’re doing something completely useless) or “I will be the one carrying the dog’s head” (= I will take the blame). As an English speaker, you will have no idea what the Swenglish speaker is talking about.

And on a side note for German, Dutch, and Danish speakers: At least among these languages, many idioms are pretty similar, but that is just the dot on the i! Does anybody know that idiom in any other language?

Conclusion
Learning a foreign language is difficult and confusing, which very often leads to funny situations and embarrassments. However, that should never stop you from trying again and learning. Just last week I confused ‘stjärt’ with ‘hjärta,’ which made for a fun conversation, but now I know that it is my heart that breaks not my butt. And I will move on with a smile.

This concludes my short dive into Swenglish. I find it fascinating how well Swedes speak English and yet, how common these characteristics are. But I am sure there is many more. What is some of your most heard or favorite Swenglish? What are some common mistakes native speakers of your language make when speaking English?

The first weeks at Uppsala University: Diving into the student life – By Anne

What to do when you’re homesick – By Yen