My admission anniversary by Lucie Kulhankova

From the day in late August when I came to Uppsala until today I had a lot of “small” anniversaries. A year since I finished my bachelor studies, half a year in Sweden, three months since the last time I spoke to someone in my native language…This week I am having a different kind of anniversary. It´s going to be exactly one year since I knew I was coming here. And I know that if you applied to a university (and especially if you want to move to a different country) you will remember the day you got the sweet news about having a spot in a classroom.

However, I realized, thinking back on that day that when I checked the results and saw that green button saying that all is well, that my brain went a bit nuts. I cannot actually recall what my first thought was. It had to be either: Well damn, I am actually doing this, or: I do not own any warm enough clothes. I went through something that I can only describe as a brain meltdown. After a while, I stabilized at a healthy scared to happy ratio and finally called my parents and gave them the good news.

Because my experience was and still is a bit confusing I thought it might bring a bit of clarity to ask the most qualified people I know: my friends and fellow new students. So I asked a bunch of them about what their first thoughts were. And I must say, I wasn’t the only person with weird thoughts out there!  Nikki had a similar thing as I did going on:

“Basically when I received the news, I was in Singapore, so I was really happy I got admitted but my initial reaction was how I was possibly going to survive the Swedish cold weather, and that it was now time and necessary to adjust my wardrobe.” Nikki, Masters in Investment treaty arbitration

And to be honest some of us were pretty scared! I remember that one of my biggest struggles, when I was making the decision of going to a different country to study, was leaving my family, friends, and safety of all that is familiar behind. And my friend Eleni who moved here from Greece was a bit worried as well. But in the end, I don’t think any of us has any regrets. 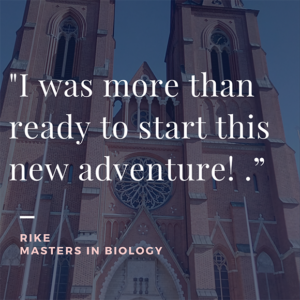 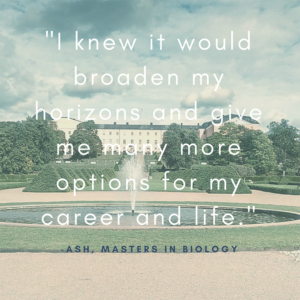 “In the beginning, I was scared as realized that I would live more than 3000 km away from home in a country where people have a very different lifestyle. But then, very slowly, I saw the positive thing behind it. That it would be a great opportunity to study at a so famous university, get new experiences with people from many countries and visit places.” – Eleni, Masters in Immunology and Microbiology

It might be hard to think practically in this kind of moment. I know I was aware of all the work that was before me to actually make the move happen, but I really could not think about all the papers I needed to fill, accommodation I needed to secure or settling my finances. But there are people among us such as my friend Kasparas who did have a practical matter on his mind!

“As I applied a few months before actually finishing my thesis and graduating my bachelor’s when I got the answer, one of my first thoughts was something along the lines of: Well now I have to finish up that thesis and graduate.” – Kasparar, Masters in Limnology 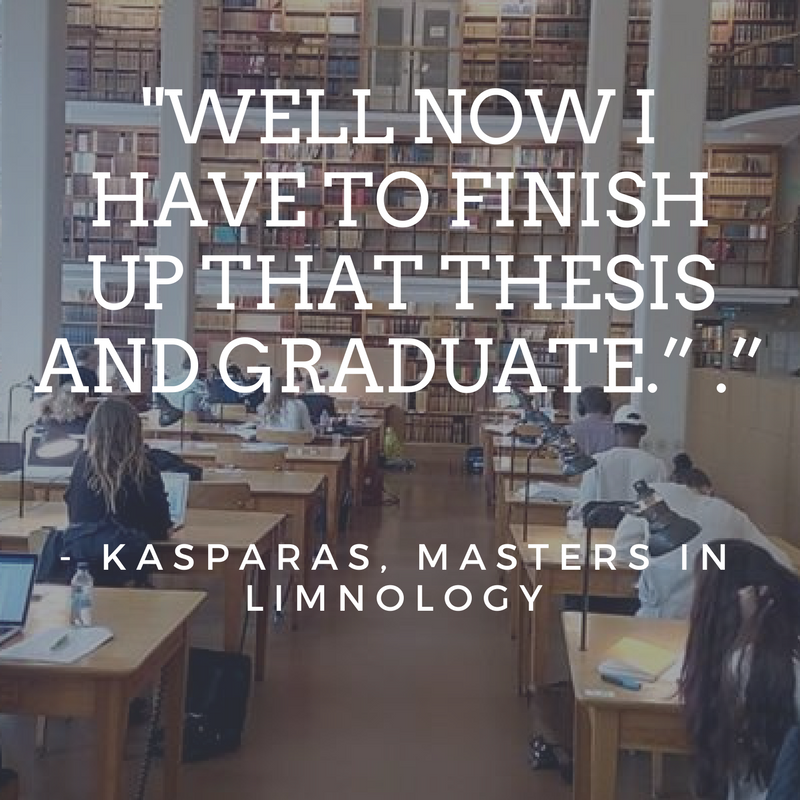 But to be completely honest, most of the replies I got were filled with excitement, joy, and overall happiness. Whether it was because the waiting and all the paperwork was finally done or because it was so exciting thinking about starting a new life and getting as much as possible from the opportunity that we got. But the thing is, no matter what our initial thought was, we all had a pretty amazing and life-changing year!

If you are now waiting for your results, worry not! We all have been standing where you are now. It might suck at some point with the never ending pile of papers you need to submit and the waiting and all the questions you have. In the end, I can assure you, it will be worth it having this experience and you will remember it, with a bit of perspective and lots of love, as all of us. Hope to you here in Uppsala in August!

Here you can read how these first few moments felt for a few of us:

“Finally, the bureaucracy issues are solved! Time to live a new life. And come out with more valuable skills, of course. ”
– Aleksei, Masters in Bioinformatics

“Uppsala was my first choice and I honestly would not have known where else to go if I would not have been accepted. I met the requirements, but still, only when the letter of admission arrived, it became a reality that I would move back to Scandinavia. I was overwhelmed and the happiness I felt when I got admitted confirmed I made the right choice. And I was more than ready to start this new adventure! ”
– Rike, Masters in Molecular Biology

“I had almost forgotten about the day of Selection results and was out with my friends that day. The other friend who had applied to Sweden called me around noon asking if I have checked the results? I did not have active internet connection there so I rang up home and asked my brother to check the results for me and call me back. A few minutes later I got a call from him and I was admitted to MSc Biology Uppsala university! It was a great experience and I took the opportunity to celebrate it then and there with my friends as we were already out. It was super exciting. One could say I made up my mind to come to Uppsala, IT WAS FINAL! But it had also meant that I need to look into other formalities to fulfill the admission including the fees, residence permit, and accommodation. It was a great experience getting selected to Uppsala University and the emotions I had was a complex mixture which cannot be put in words! ”
– Sreekar, Masters in Biology

“I remember that moment like it was yesterday. I was checking every day the website and finally when I saw the notification, that green dot on the side of the most beautiful word for that day: “Admitted”. I cried and laughed, jumped around my room and called every single friend: I was enthusiastic. ”
– Gianluca, Masters in Immunology and Microbiology

“It was surprising. Only three words can describe it. Aurora, cold and Scandinavia! This place fulfils my expectations.”
– Sanka, Masters in Applied Biotechnology

“I was so happy to be given the opportunity to experience a new culture and study in a different country. I knew it would broaden my horizons and give me many more options for my career and life.”
– Ash, Masters in Biology