Nation Songs and their Meaning – By Layla Koch

If you are a student in Uppsala and sociable to an average extent, you are most likely member of one of the 13 student nations. And if you like devouring good food, pretending to be fancier than you are, and drinking too many different alcohols, chances are high you have also attended either a gasque or a sexa. These fun, often physically detrimental events have one common theme, which always gets to me: the songs.

Every five minutes, a slightly intoxicated guest will raise their glass and propose a song, which all attending Swedes will magically know by heart. It might be an increasingly fast song or a song with movements or a song where suddenly everybody will stand on their chairs. They are beautiful and traditional, but as an international student something about them annoys me: I have no clue what I am chanting and cheering about. So, in an effort to help us all, let’s unravel this mystery.

For this article I chose the three most common songs. Due to my limited knowledge, I know them as the ‘thank-you-song,’ the ‘drinking-song,’ and the ‘ending-song.’ You will sing them at every dinner in addition to your nation’s individual anthem, so listen up: This is important.

Let’s start with the most difficult song, because IT IS NOT IN THE SONGBOOK. This still gets me mad. Det var i vår ungdoms fagraste vår dates back to the 1700s, but the version we sing today is from around 1900. It was further popularized by the band Sven-Ingvar’s 1965 hit, however, they sported different lyrics. Since it is not in the book—which we all paid for(!!)—I will bless you with it here:

This song talks about how in our youth’s most beautiful spring, we drank to each other and raised our glasses in a toast to N.N. (insert your name, if you’ve been a good person), and N.N. will not say no to the toast. As an alternative to this, people will also frequently make up a funny rhyme in response to being thanked, because LIFE IS NOT DIFFICULT ENOUGH ALREADY. (laugh-cry)

You will sing this song to club workers, cleaners, song masters, and basically everyone you want to thank. During the last Städdag (= cleaning day) at my nation, I was elected cleaning queen and had this song sung to me for the first time. I could not do the solo, because I had not memorized this song. Don’t be like Layla. Prepare! 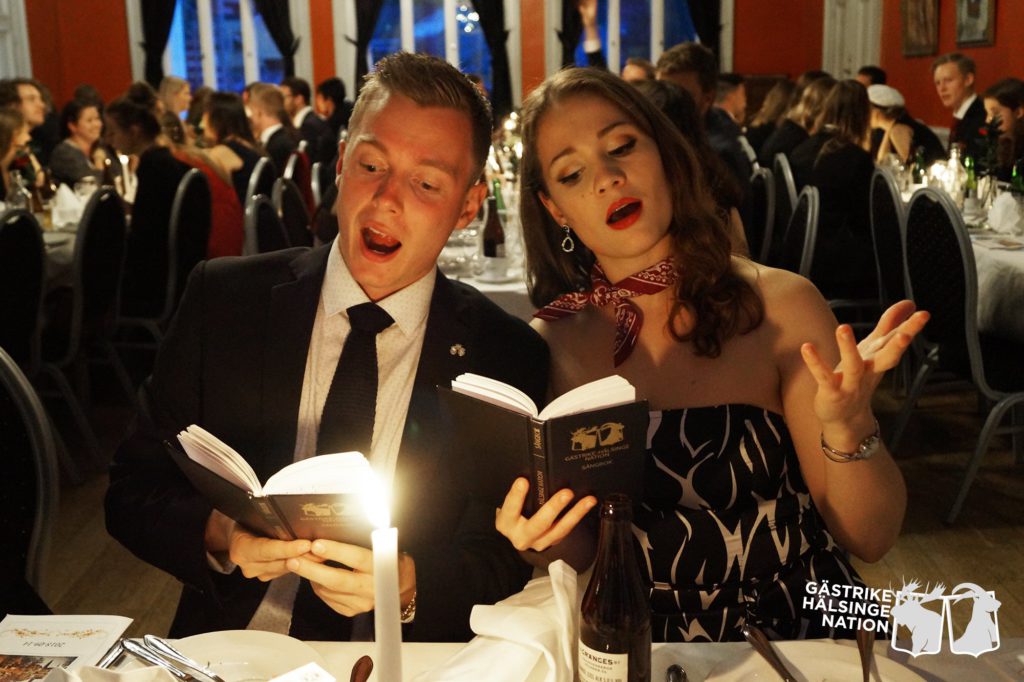 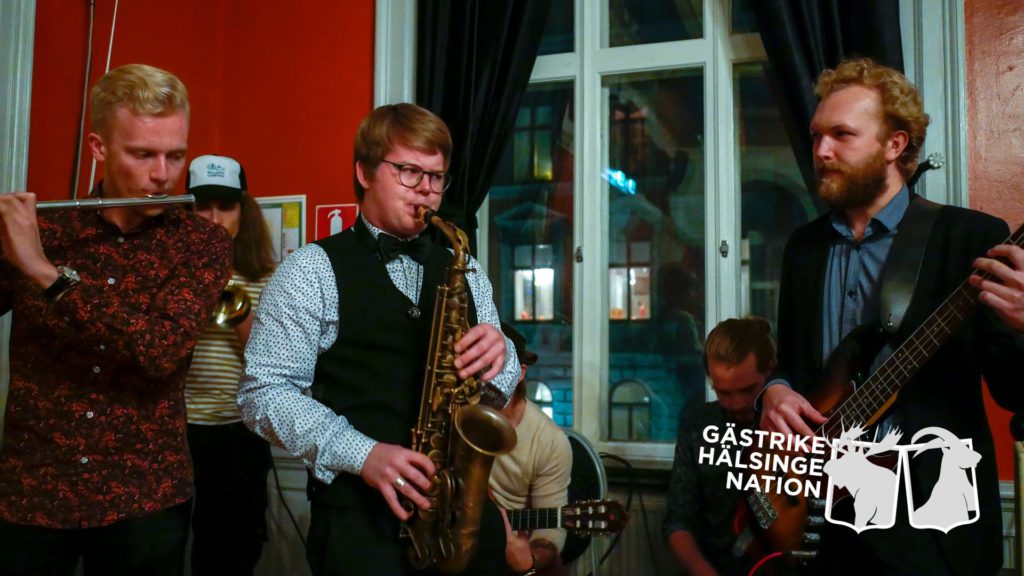 Oh, Helan Går. This is the song you chant to your neighbors while waiting for the main course. You already know you have not been responsible and now are giving up on feeling okay the next morning. Traditionally, you sing this song as the first so-called snapsvisa (= Schnaps song). It was officially played in an 1845 opera, but many historians believe it to be of much older origin. Fun fact: When Sweden won the 1957 ice hockey world championship in Moscow, not all team members knew the words to the national anthem Du Gamla, Du Fria, which is why they sang Helan Går. So, yes, everybody knows this song.

One advantage: It is super easy. As all toasting songs, it does not have many lyrics, and content can be compensated by volume anyways. ‘Helan’ means ‘the whole’ as in the whole glass and also ‘first Schnapps’, and ‘går’ means it’s going down, so basically ‘Bottoms up!’. The remainder of the song talks about how if you do not drink the first shot, you will not get the rest either.

This is the song you should remember from your time in Uppsala, because you can easily teach it to your friends back home and make them believe you actually learned Swedish! Also, it’s fun! (Drink responsibly, though!)

We have thanked, and we have toasted. Now it is time to wrap this up and send everybody to the Släpp (= after-party) or home depending on their state. The soundtrack to mark this occasion? ‘O Gamla Klang och Jubeltid’ of course! This song originates from 19th-century German student tradition where it is known as ‘O alte Burschenherrlichkeit.’ Although the lyrics are very close to the Swedish version, due to history the song is no longer popular in Germany. However, it was translated to Swedish in the 1920s and is now an essential part of nation life.

This song is all about how wonderful it is to be a young, careless, and irresponsible student, and how this time goes by too fast. It keeps repeating ‘O jerum, jerum, jerum / o quae mutatio rerum!’ This basically means, ‘O Jesus, Jesus, Jesus / O that things change!’ (Don’t worry, I also did not take Latin. It’s Google Translate.) Because of its historicity, the song only talks about four main scientific branches. Therefore, if you study neither medicine nor law nor theology, just sing the philosophy part! And don’t forget to stand on your chair during the last stanza as the song proclaims to raise your glasses to your friends, while you are both still young gods, so that your bond will remain forever.

Notwithstanding, however beautiful student life is, we do all want to graduate at some point, so DO NOT SIT DOWN after this song or—legend has it—you will sing it forever.

This concludes my short dive into nation songs. I hope you could learn a bit more about what you have yelled on numerous occasions and will maybe retain some of it until you are back in your home country. I love the tradition of these songs, because they are uniting and so fun. What is your favorite nation song? Does your culture also have songs everybody knows? Tell me about it in the comments below!