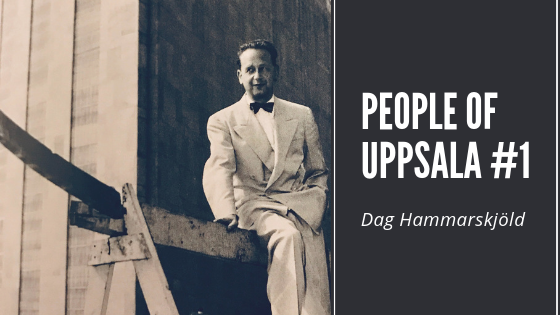 Image from the book: Dag Hammarskjöld, Markings of his Life. Written by Henrik Berggren

Although Uppsala is not too big of a city, it has produced quite some remarkable people. They walked on the same streets as we did, or have lived in close proximity to our corridor student homes. Some of them have been of great importance for our home away from home, Uppsala that is. Others have left an international imprint, or just on us. All of them have one thing in common: we think they are worthwhile to write about. And that is what we will do.

During my semester in Uppsala I work as an intern at the Dag Hammarskjöld Foundation. I am involved in their inclusivity project and research how UN agencies operationalize and promote inclusivity at the country level. I am conducting this desk-review on The Gambia, while also contributing to other activities related to their UN 2030 Agenda work. The Foundation has been set up in honour of a great civil servant, the second secretary general of the UN. The man who effectively restructured the UN, who created a base for peacekeeping, who was a exceptional negotiator. The man who died in a plane crash on a mission to mediate in the 1960’s Congo crisis. The man who posthumously has been awarded the Nobel Peace Prize.

Last monday, I was all ready to start. I walked towards the office in the snow and although it was -15 degrees, I could not have been happier. The cold did not withhold me to go outside but the office heating was not as strong. Anita, the office manager, told me to go back home. I could take the book about Dag Hammarskjöld with me, to read, to get to know a bit more about the “remarkable man” as she said it. Once in my room I curled up in my chair under a plaid, with the book on my lap (the book is called Dag Hammarskjöld, Markings of his Life and is written by Henrik Berggren) . I realized that all the superlatives used in the same sentence when someone speaks of Dag Hammarskjöld, are indeed not misplaced. Let me introduce him to you, through some quotes I have read in the book.

“Wild roses and night-flowering silene flower on the slope down to the old path. The hawks mother have found their way to the honeysuckles that clings to the east wall. The trees are swollen with lush greenery.”

Hammarskjöld grew up in Uppsala, in the famous red coloured castle. Most of his writings about his youth are not too happy, having a difficult relationship with his father. His father had high expectations of the four Hammarskjöld boys, which they all felt pressured by. This written piece, however, presents a happy memory of his childhood surroundings.

“As a schoolboy here, I was in a certain position – it is not too much to say that it was a lonely one, since the other boys consistently regarded me as a rather critical stranger – and in a sense grew in me of being not only uninteresting but – at least occasionally- “a minus.”

He was remarkable, in the sense that he often felt alone for no good reason.In most of his writings he reflects on his position in life, unsure about it, and how he thought it was difficult to socially interact. These reflections are brutally honest and show a personal insecurity. He is also just a man. A man who dared to present his vulnerable side and exactly that made him strong at the same time, I believe.

“A wind from my unknown goal. Stirs the strings. Of expectation.”

Not only was he unsure about his position in life, his future was also rather insecure. Dag Hammarskjöld graduated as an economist and had imagined an academic career. His PhD time, however, wasn’t as he expected and he decided to follow his father’s path as a civil servant for the Swedish government.

More importantly that his economic background, are the philosophy courses he had followed during his academic years. These courses have formed his values, values he greatly lived by. Especially the value of neutrality, which he considered to be the greatest good of all times. Especially for civil servants.

“To say yes to life, is to say yes also to yourself.”

When Dag Hammarskjöld came to be the second secretary general, he have said: “For all that has been – thanks! To all that shall be – yes!”. This saying clearly shows that he was ready for the new job, for a position where he would not have to struggle (or at least in a smaller manner) with its holy objective of neutrality, as he had done the years before while working in the Swedish government. The quote “To say yes to life, is to say yes also to yourself”, I believe, represents the same attitude while it being more personal. He considered it once in a lifetime opportunity for which he wanted to give everything.

“To observe as Hammarskjöld tackled an international crisis was like watching an artistic masterpiece or listening to an outstanding musical work.”

Urquhart, a UN colleague who was impressed by Hammarskjöld mediation skills and, as you can read in the quote, compared it to outstanding achievements. Dag’s most known diplomatic successes are impressive: the release of American soldiers by China during the Korean war and the resolution of the Suez Canal crisis in 1956. He practiced the form of preventive diplomacy which has been an important heritage for the UN.

“What I ask for is absurd: that life shall have a meaning.”

Let me end with this short but powerful saying. Reading the book, I believe that this quote represents Dag Hammarskjöld and his position at the UN the best. Like I have said, he was also just a man. A man with doubts. Just a man. Just a person.

Be careful with the kiss on the cheek! (French advice) – By Johan