Those good and bad things you will never know about GASQUE only until you try it by yourself.

For new exchange students in Uppsala Uninversity, going to one GASQUE is always on the must do list. From the international Gasque to other several variations hosted by student nations, it is almost impossible not to be enticed by trying such a tradition-oriented event. I chose the one proposed by my nation with other two nations as collaborators and collected opinions and experiences from myself and other participants to compose this story so that my dear readers, you will have something prepared in mind about what you may experience both good and bad in your future Gasque. 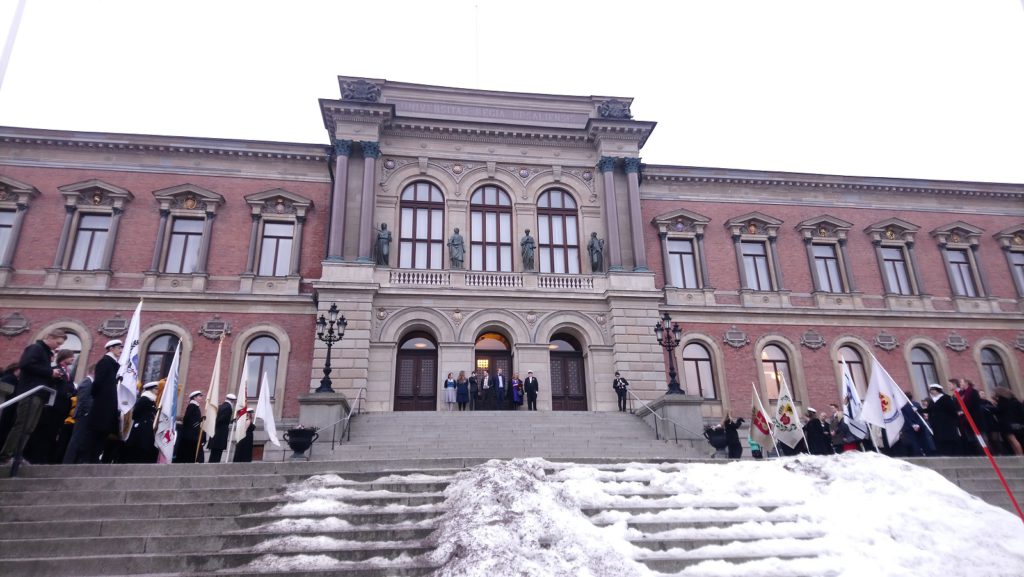 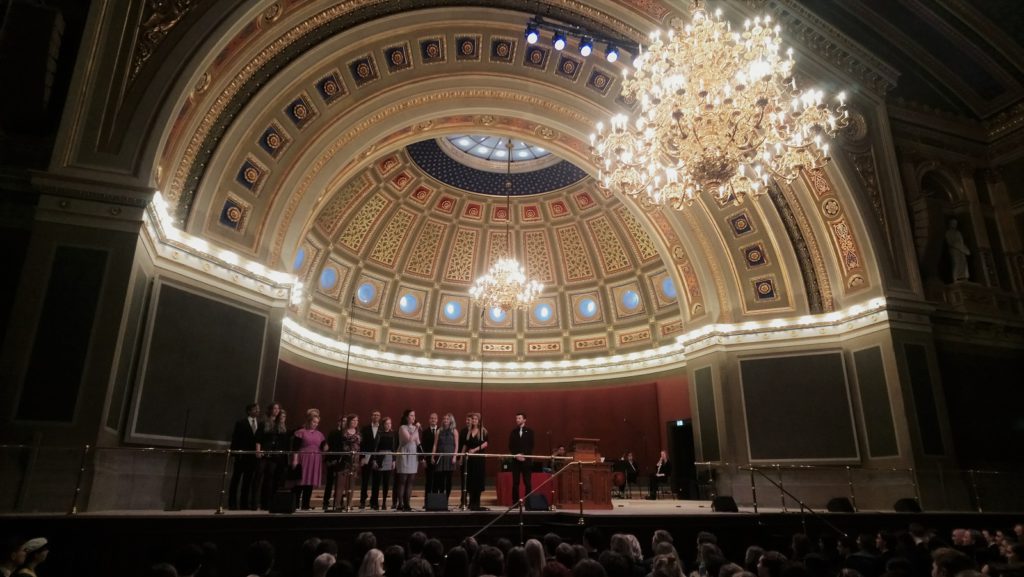 Merits
A Reccegasque was composed of four sessions: reception ceremony, pre-drink, dinner, and after party. From three o’clock in the afternoon to midnight. Such a long marathon in my opinion was designed to cater to the maximum students who have various expectations toward what a first formal nation event should look like.

For example, first, the formal reception ceremony held at university aula (The University Main Building) displayed the most magnificent side of nation traditions. Members from each nation followed their nation flag and marched from their own nation house to the university aula. We stood in lines at two sides of the building, and entered the main building once the emcee called our nation’s name. When everybody was well arranged at their seats, here came the speakers such as Curator Curatorum and Vice-Chancellor for welcoming speeches followed by a live performance from nation choir and the award presentation to those students who have special contributions to their nations. In between, it was the music played by the orchestra to mark the transition of each small session. 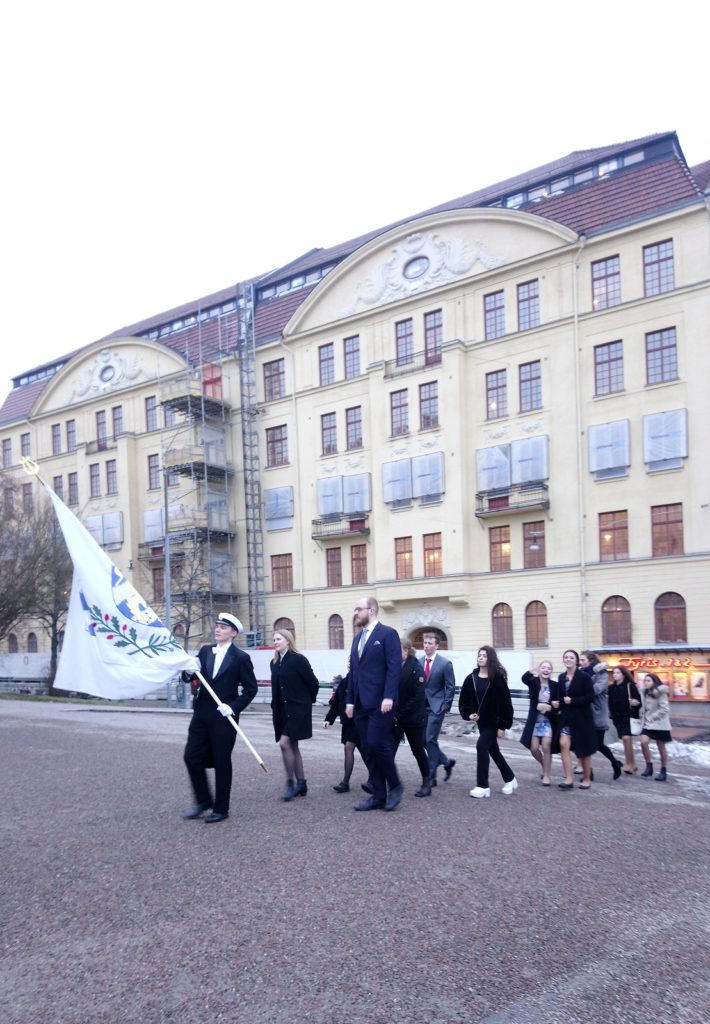 After the reception ceremony, it was the time for interpersonal interactions. New members were guided to one nation house for pre-drink while waiting for the dinner at another nation house. The dinner was held at Östgöta nation with classic stairs leading up to the main dining hall. According to the seating plan, participants could easily find their name plates on the designated seat. Those who sitting next to you could be your friends, or even a stranger but later becomes your friends and ushers you into another social group. (Here is exactly my experience which I will share it in next blog) I truly agree with the notion explained by the inspectors about what the value of a nation is: It is a place where encourages students to socialize with other students with different professions, backgrounds, and life experiences. During the dinner, three dishes were divided by several nation songs, speeches, performances, and tons of dialogues exchanged on the same table. 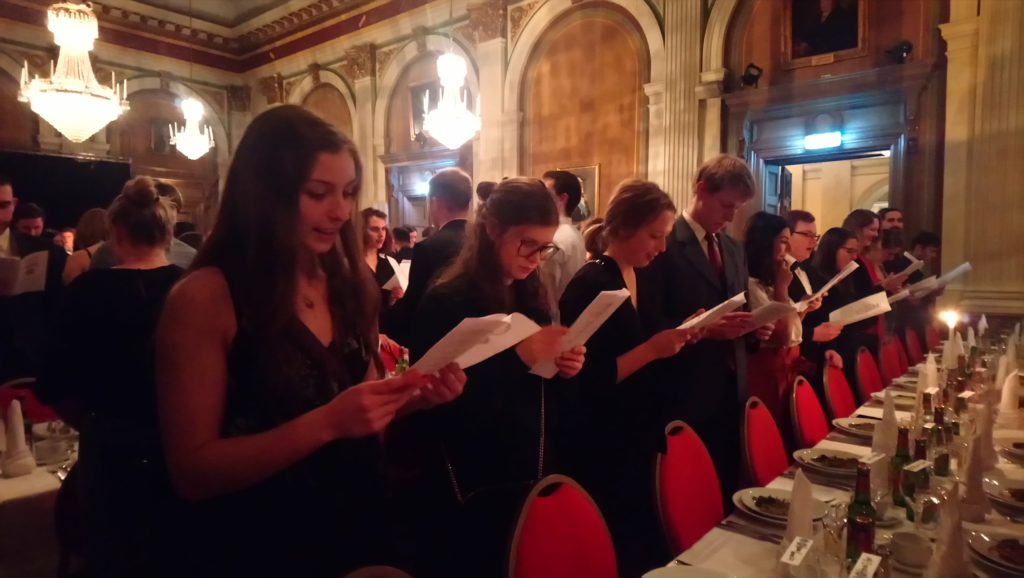 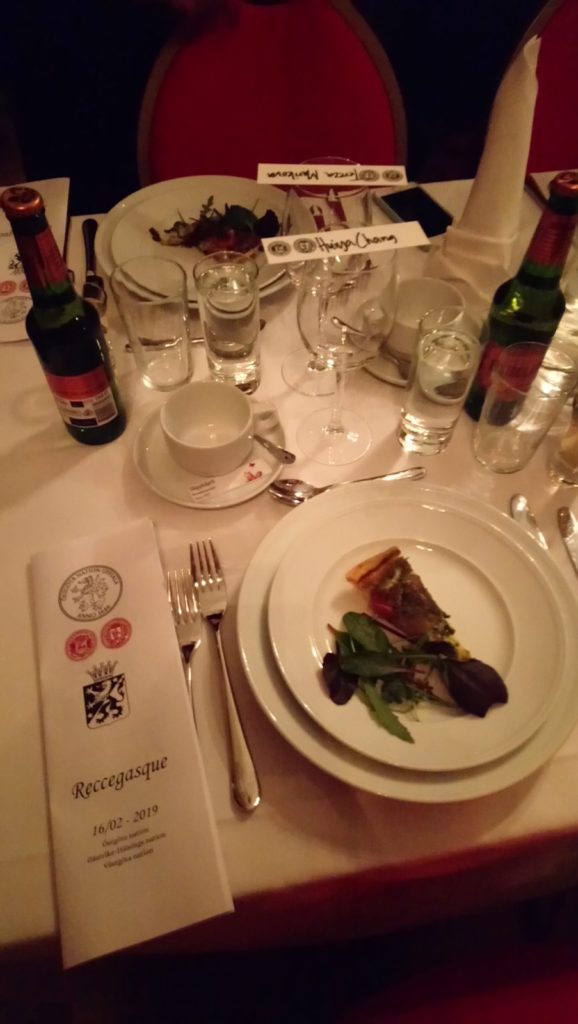 Almost around 23 o’clock, the dinner went to the ending. To continue the atmosphere for nice dialogues, participants were invited to the second round after party in their own nation houses. In GH nation house, the place usually used for dinning became dance floors. With fast shining light and non stop music by the live DJ, people entered another state where some of them were very proud to boast, “I AM SUPER DRUNK” in another random conversations in the toilet.

As I said in the beginning, there is more or less some sort of secret fantasy about this event. No matter from the facebook event page or the oral promotion given by the nation representatives, it sounds like if you never try Gasque, your student life seems to miss one piece of puzzle to be completed. Therefore, before joining this event by yourself, you could imagine this event in very different ways. Once I tried it by myself, I saw some part I like from the bottom heart, some are new and striking to accept right away, some are of course deserve improvement, and mostly they are the problem of logistics such as time management and transition arrangement.

As a curious participant, if you want to participate in everything, what you need is a 12 hour energy battery. According to the time schedule given from the facebook event page, the first session started at 15:00 and lasted until midnight for the party. We came to the gathering point on time, but then realized an extra waiting time was needed before everything starts. As the night fell, the dinner times kicked off, but then within almost three hours, we were served only one dish, which was the entrée pie at the already passed dinner time.  Between each dish, participants were invited to leave the dining room and wait outside. Finally, when the delicious dessert and coffee were served, it was almost 23 o’clock, which makes the coffee itself as an energy stimulant look a bit embarrassing.

The transition between each session is the biggest challenge for organizers and participants because all of them were held at different places. On one hand, in a chilly evening, wearing high heels, formal dresses, and suits, walking on snow covered streets, it was as miserable as a bride running away from the wedding. Therefore, I noticed many students chose smart outfits rather than formal dress code or skipped the first two sessions to overcome this inconvenience. On the other hand, for the organizers, it was hard to use only one venue to serve such a group of people with a row of activities especially when the office team was probably outnumbered.

Good and bad experiences happen all the time in cross-cultural context. They are a process of cultural encounter and personal growth because when a person faces these conflicts, he gets to know what general people like and what himself likes, which will make a person more assured of his goal and preference at the end.