Valborg 2019 – Expectations vs Reality – By Lucie

Since the very first sunny August day I came to Uppsala, I’ve been welcomed with the phrase: “Beware, winter is coming.” Everyone has warned me about the Swedish winter and how tiresome it may be. However, in the same breath they added: “Wait for the last of April, it’s worth it to outlast the winter to experience Valborg.” So I did.

After experiencing (and successfully surviving) both, I can say that the endless winter is more than compensated for by Valborg. Since I’ve heard so many different myths and legends about this annual spring celebration, I had several expectations. Some of them were fulfilled, some of them were not. Let’s see:

Expectation 1: Valborg is a full day of partying.

Right. But that’s not all. Valborg celebrations last about a week, which is full of events – not only at the nations, but also more official ones like Donning of the Caps at Carolina Rediviva or Spring Salutation at the Castle hill 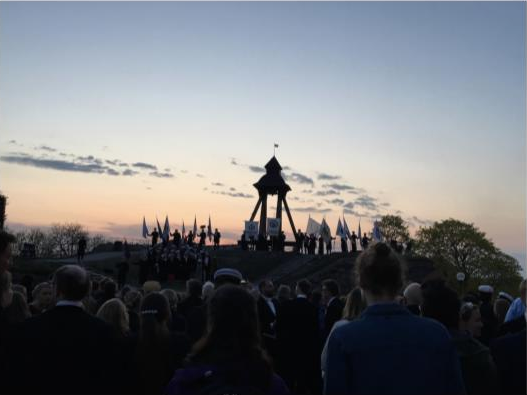 Two days preceding Valborg are called Skvalborg and Kvalborg (meaning qualification for Valborg). The main activities take place on April 30th, which is followed by Finalborg. This finale day links elegantly to the ‘qualification’ day on Kvalborg. On the whole, this celebration race has also about 4 days.

Speaking about about a race…

Expectation 2: The boat race at Fyrisån is a breathtaking competition.

I had this image in my mind of people on funny boats going as fast as possible, trying to overtake each other while their boats gradually fall apart. In reality, this event taking place at 10:00 on April 30th was more of a parade. Nevertheless, that gave all of us more time to admire the original boat designs and greet the crews. And to satisfaction of those who expected some drama, a couple of boats overturned during the ride. 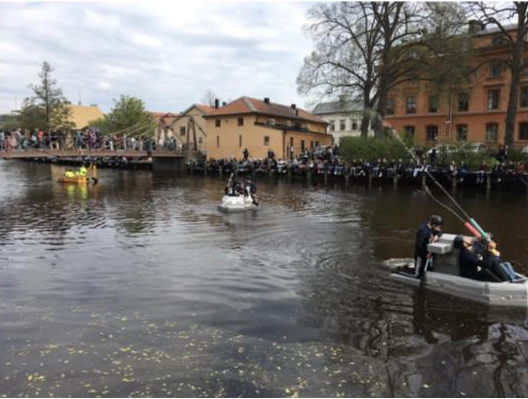 Expectation 3: There will be a lot of people at Ekonomikum park.

Wrong. It wasn’t a lot of people. It was masses of people gathering not only at Ekonomikum park, but everywhere in the city from early morning until late in the evening. Uppsala was truly living a life on its own. Young and old, Swedish and international, all people were mingling and celebrating together.

What I appreciated very much was the organization of the whole event. The official sponsor of Valborg (Varannan water) managed to keep everyone hydrated during the whole socially exhausting day. Although most of the plastic water bottles were forgotten in the park in the evening, impressively enough, all of them were gone when I woke up the next morning (or afternoon, better to say). 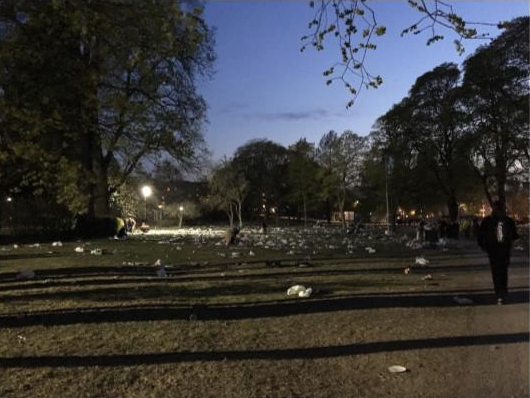 Expectation 4: I will see all of my friends during Valborg.

I couldn’t be more wrong. A meritorious Uppsala resident and Valborg celebrator told me – “Don’t make plans with more than one person during Valborg, it will never work out.” Indeed, it was difficult to make big plans as me and my friends had wholly different ideas what to do and see and it was close to impossible to find all of them in the crowds.

But don’t worry, you’ll never be alone. Instead, you may end up with a couple of closest friends or people you’ve barely seen before and still have the best time of your life. I recommend not planning in advance too much and rather being more spontaneous.

Last week of April has something in stock for everyone and there is no universal recipe how to cook your Valborg right. You can choose from a variety of ingredients – from hanging out at Ekonomikum park, watching bonfires at Gamla Uppsala to eating barbecue burgers at one of the nations.

So go and make the best mixture during Valborg 2020!