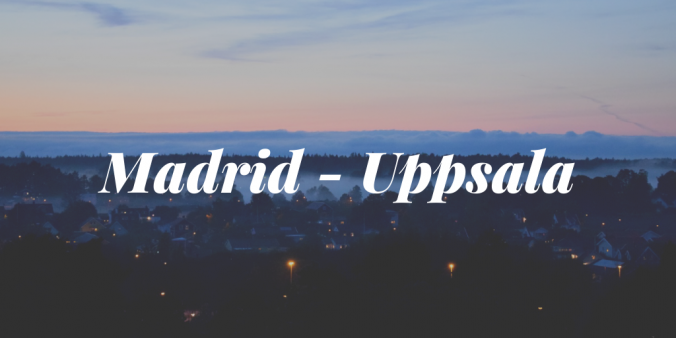 Hello! I guess most of us start writing about life in Uppsala on our first blog, which might seem a bit boring, but as an incoming student I wish I could have read more of these from different people, everyone experiences studying abroad in his/her own way, so here goes mine!

I had one of the most amazing summers just before coming to Uppsala, and what made it so good were my friends. I went on a little trip with some of them, and on July I worked at a music festival, as I usually did every summer, and in which the team feels like family. I think I was not really conscious of what coming here would suppose until that festival was over, and I had to say bye to everyone. In that moment I realized the thing I was going to miss the most was them (apart from my dogs, obviously hahaha). When I got into the plane many different emotions came to me: I was really excited about coming to Uppsala, start my studies here, and meet new people, but at the same time part of me wanted to stay in Madrid.

I arrived here out of the welcome week, meaning one of the university buddies was waiting for me at Uppsala Centralstationen to introduce me to the place I was going to live: a room in a Flogsta corridor, that actually has really good views. I knew the room was going to be empty, but I wasn’t expecting the weird feeling it gave me on the first night. I felt that I needed to go out and roam around just to not feel like that during the next day. This changed two days after coming, during the IBG welcome days. In these days, we (biology master students) were given lectures about university lifestyle, and about living in Uppsala in general, and different activities were planned, including a barbeque on the last day! This was my first actual contact with other students, and I met a lot of people from different backgrounds and cultures that I can call friends now.

Coming from a big city as is Madrid (Spain), that is always crowded, Uppsala seemed too quiet at the beginning, and it still feels like that sometimes… but that doesn’t mean there’s nothing to do here! During these months I have been travelling around and trying to do as many plans as my free time let me; I went hiking and berry picking to Flottsund, chased auroras staying up late more than once, and visited Stockholm and Gävle.

However, if you plan to visit any place while staying here, I would highly recommend checking the establishments opening hours (specially on small cities, I wouldn’t worry too much about Stockholm). I visited Gävle with a friend on a Saturday and the first thing we did when we arrived there was going to the tourism office to get a map, but apparently, the office closes on weekends… Am I the only one for which this doesn’t make sense? I mean, it’s a tourism office, do they expect more visits during weekdays? Anyway, it’s a beautiful place to go, and really small, so you can probably see full of it in half a day 🙂

Of course there are people who look more for party plans, and maybe Uppsala is not the best place to do it, as many places in town close early (compared to Madrid, in where there are pubs and discos open up to 6-8 a.m.), and it’s not the cheapest thing to do, but if you really want to, you can always find a party in Flogsta and Student Nations; I would say there’s one almost every day at some corridor… You won’t find me in one of these though, I guess I had to experience it at least once, so I went to one of them, but now I know they are not for me.

Now that I have been here for a few months, I have done my first exam, and it’s starting to get cold, I can say I miss many things about living in Madrid, but I wouldn’t change what I’m experiencing here to go back. Actually, I cannot wait for it to start snowing and to go north on December… I’ll probably write about that too, so keep an eye on the blog post updates!

Masters in Sustainable Development: What to Expect: Very Personal Review – By Müge Kayra