The UF Debate Club: more than a debate club 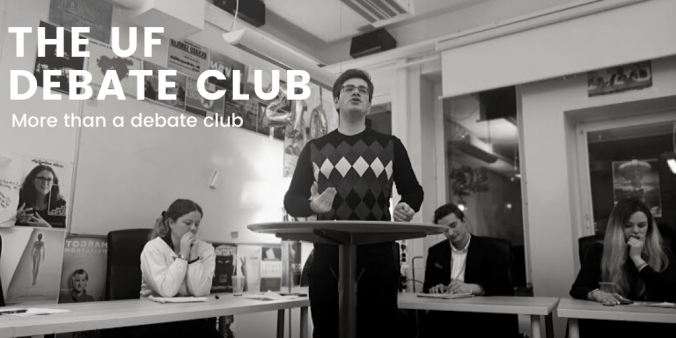 One of the things that I have never imagined when I came to Uppsala was to be involved again in a debate club. I do love debate. In fact, I was doing it for four years in Córdoba, my hometown, with CDU (for Germans, is not related to Angela Merkel´s party) , and there I learnt how to speak and persuade in public, had a critical point of view and, the most important point, I made astonishing friends and I spent my craziest years in CDU, living experiences hardly ever to repeat. So, when I saw a post in “Uppsala International Students | Exchange&Erasmus Uppsala Univeristy” I didn´t doubt to join.

Maybe if you read “Debate club” the first picture that comes to your mind is a posh guy or girl, maybe with a suit sewn by hand and really polite. Well, there are people with this stereotype, but you usually find normal students like you and me who want to improve their language skills. Why? I think the magic thing of the debate is that EVERYBODY can be the best speaker or debater in the world and the “job” carried out prove that. So, in UF Uppsala Debate Club (its official name) you will find cheerful students really looking forward to learning that skills, most of them from scratch so you aren´t an exception.

For the last two semesters, the club was lead by Hugh Bartley, a brilliant and charming debater from Australia that taught and encouraged people to improve their debate skills throughout the semesters. Most of the members were novices, so they started from scratch and they learnt a lot. A proof was the impressive progression shown by them and the novices learnt how to create an argument, defend it and refute other ideas in English.

These formations were focused on these three main points but also there was time for debaters to teach about some topics such as economy, science, or more informal talks like pop culture or sports. This is an overwhelming experience in which you are able to enhance your abilities.

The highlight of the season was the Debate of Champion, in which all of the members showed their gift of the gab and the knowledge

Why I think that the UF Uppsala Debate Club is one the things that you must try during your period in Uppsala? First of all, because you will meet people with a critical perspective and attitude to change the things and break with the establishment is not as usual as somebody can think. From my point of view, this helps to see the things from other perfective and have a wider view of some ideas.

The second point is related to the last because after each meeting the debate usually continues in a nation but with a beer and a burger (sometimes we went to Pizzeria Palermo) in your hands and enjoying the time with your debate friends, which is without any doubt it´s the best way to meet new people. Finally, and from an academic point of view, it helps to persuade your friends to do the plan that you think is best and explain much better your ideas to an audience or your classmates.

So I just can encourage you to join to the debate club and open the door to an amazing world in which you will enjoy and learn at the same time.

Masters in Sustainable Development: What to Expect: Very Personal Review – By Müge Kayra

When the sky explode above you! – By Manish