The first Gasque – By Rhianna Rees

The Swedish traditional ‘Gasque’ roughly translates as ‘Formal Student Party’ usually involving a three-course themed dinner. You can expect good food, formal attire, speeches and, most importantly, songs. Most Gaques are followed by a ‘Släpp’ an afterparty with a dancefloor with a DJ, occasionally until 0400. Alternatively, there is also a ‘Ball’ which is more formal and a ‘Sexa’ which is a less formal student dinner. Almost every student is affiliated with at least one nation and therefore has the right to attend all that nation’s Gasques. The themes vary from nation to nation, but the most common ones are: Crayfish Party, New Members dinner, Christmas, Spring Ball and Male / Female dinners.

The very first Gasque I attended was the International Gasque held at Vastmalands-Dala Nation in my first month. This was organised as an ‘intro to gasques’ for international students. The dress code was Kavaj (which means smart). Men were expected to wear dark suits and the women, at least knee-length dresses. This is the story of my first experience. 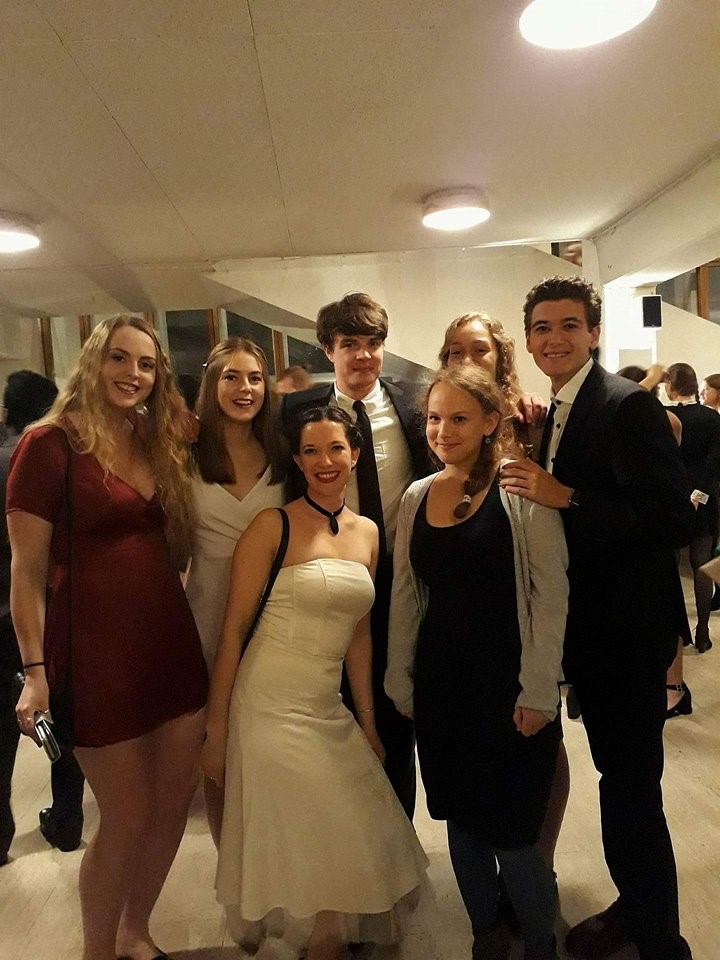 Entering the main entrance, I put my coat into the dressing room and was welcomed with a glass of bubbly. Once I began mingling, I soon began recognising people from my course, nation and Swedish language classes. Everyone knew everyone somehow. It felt like a game of six degrees of separation. There was a list of names and table settings on the wall for us to find our places before we entered the main hall. Traditionally the table settings are man-woman with the man’s date to his right.

2 sets of cutlery, 4 different glasses and an already prepared starter were waiting at our table settings. We had a set menu on a sheet in front of us, song books and a set of instructions for the night. The waiters came around to make sure our shot glasses were filled with schnapps for toasting at the end of every song. We later found out these should last 3 songs – a third of the glass per song. After that you should purchase an ‘snaps’, an extra glass of schnapps. Or toast with beer or wine. Whatever you have, as long as you’re toasting it. Our hosts for the night welcomed us and went through the main rules: no talking or eating during speeches, no going to the toilet or smoking (unless you really have to!) until the official breaks and sing with the whole group (no random solo singing).

The songs were mostly Swedish, so a hall filled with International students, well you can guess how we did… singing in a language you can’t read to a tune you don’t know. Luckily the host table was loud enough for all to follow and I’ve since found that after the second or third time singing a song, you get the hang of it! There is also a certain way to toast at the end of each song. Tonight, we toasted (for women) left-right-opposite DRINK opposite-right-left DOWN. For men, it goes right-left. Confusing at first – I know, but we sang a lot, got a lot of practice and had great fun. 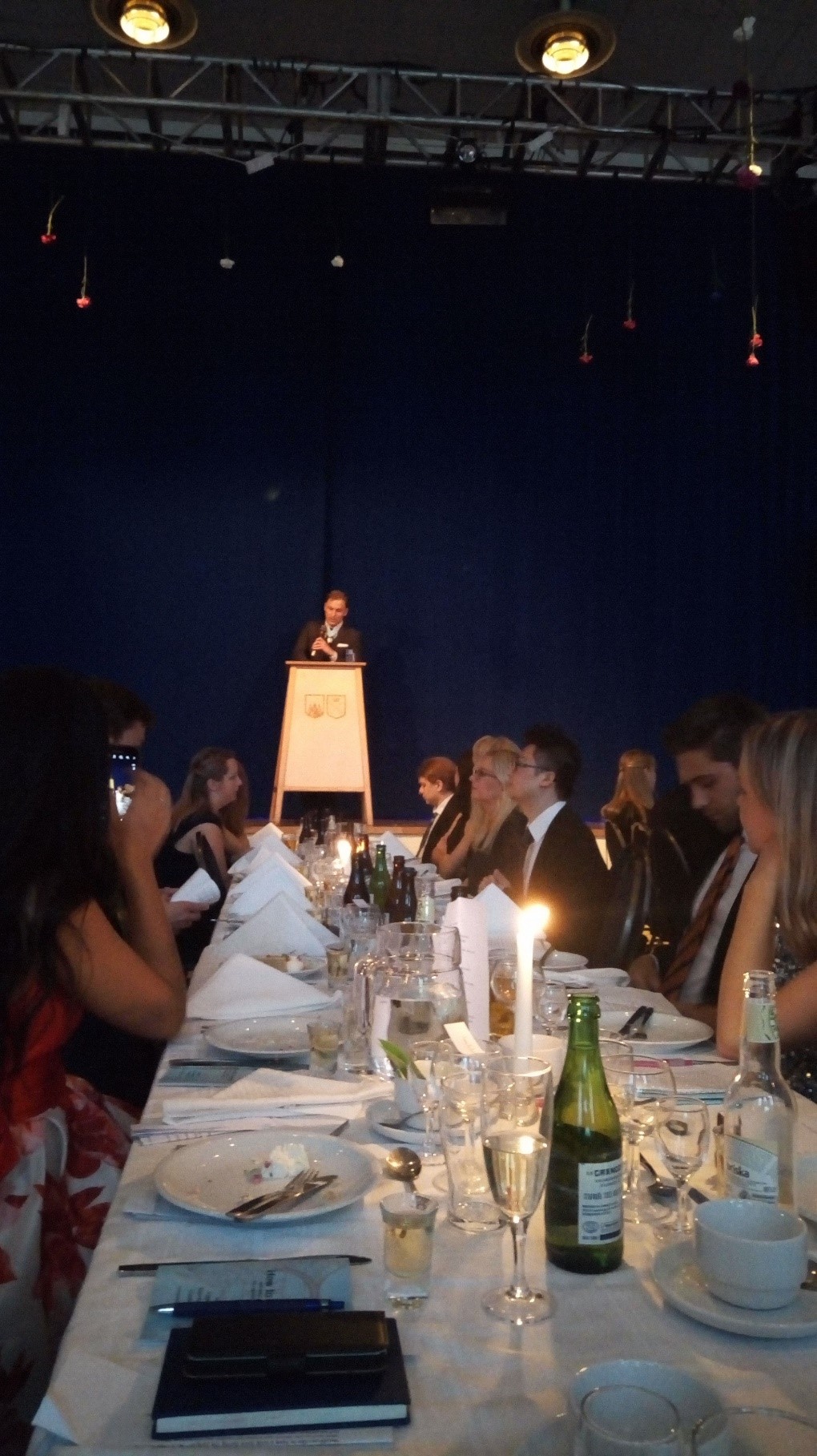 The head of the International Committee giving a welcome speech

The International committee graced us with fantastic entertainment for the evening from many different nations. A jazz band from Uplands performed during our starter, with an entertaining bubble / balloon artist at the forefront. A female choir from Göteborgs during our main course who sang beautifully in Swedish and then ended with ‘Africa’ by Toto. And for dessert, a ‘Spex’ (drama) group entertained us with a ‘How to Swede’ comedy set, calling on different members of the international committee to answer questions like ‘what is lagom?’ – ‘it’s a state of mind’. 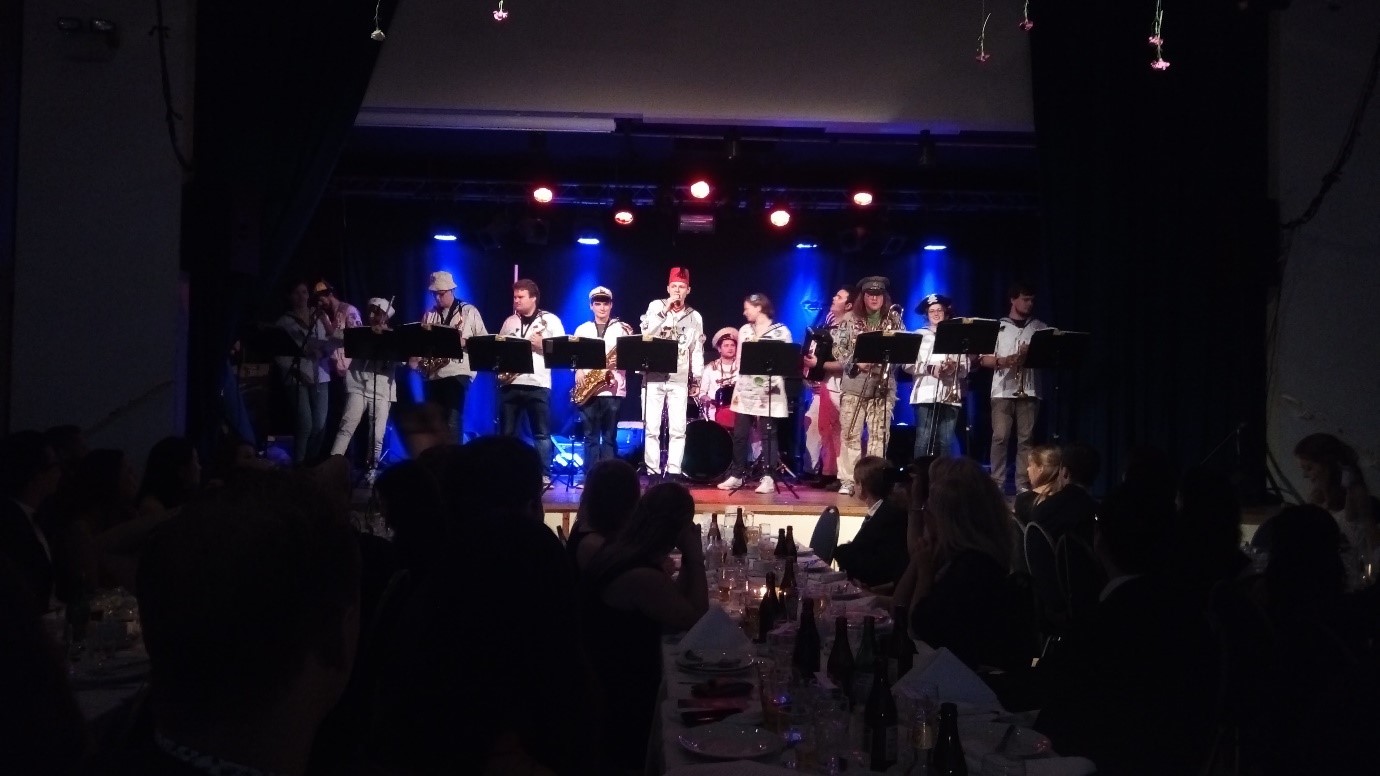 The Jazz Band from Uplands

During the night my neighbours and I spoke about where to get the best Swedish Meatballs (IKEA obviously), how to make great Pytt-i-panna and what a cykelstyre is. Gasques are a fantastic way to meet new people and make great friends and songbooks help to remember the night (especially if you’ve had a few too many avecs!!). Traditionally, those around you will write a note in your book which you’re not allowed to read until the next morning. It can just be a short line about how nice it was, a long spiel about all the things you spoke about, or a surprise – like a number from someone who’s interested in seeing you again.

Our last song, O Gamla Klang, ends with everyone standing on their chair holding hands. (Fair warning: there’s also a section in the middle of the song where people bang on the table and drinks can spill everywhere… like mine did…). The tradition dictates that if you sit down again after the song finishes, you will never graduate. A nice way to get everyone out of the hall quickly and ready for the Släpp.

One final thing. During the breaks (we got two, it was a big night) some went out to enjoy a ‘Mellansup’. I won’t tell you what this is, but again it’s a tradition – one which I hope you’ll be able to find out for yourself! 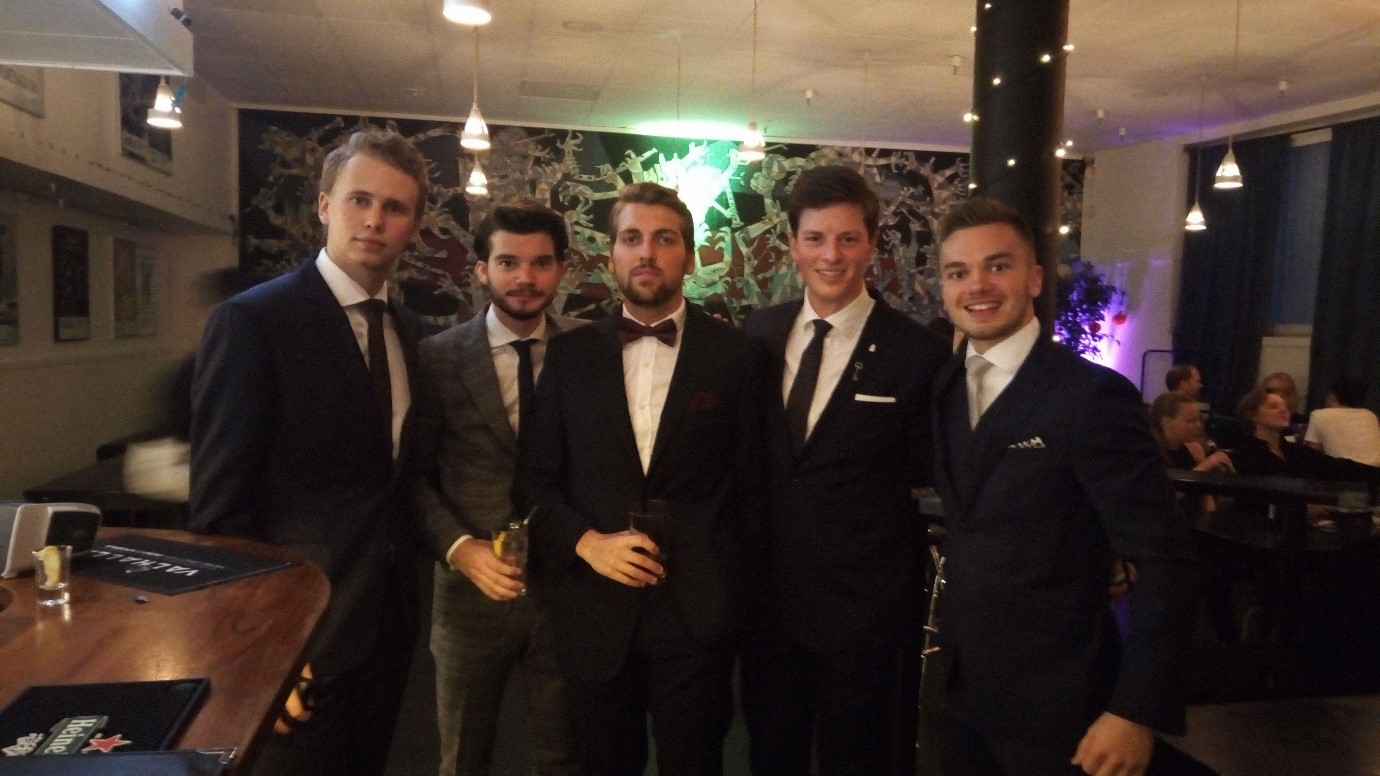 Some students enjoying a Mellansup