The Singing Swedes – By Emily Atkins

Åke Daun, a respected former professor of Ethnology at the University of Stockholm who sadly passed away earlier this year, spent a decade of his life researching the people of Sweden for his book, ‘Swedish Mentality’. His conclusions? That Swedes are “socially closed”, “spiritually empty” and, put simply, “dull”. Now, you might be wondering where I’m going with this; it seems a bit harsh opening a blog post by insulting the Swedes! But don’t worry – whilst some Swedish people may seem a little shy when you first meet them, I promise all it takes to transform them into some of the loudest, jolliest, most welcoming people you’ve ever met is an opportunity to sing!

As you may already know, the student nations at Uppsala University hold traditional dinners called gasques throughout the year for various occasions (or just for fun). Every gasque begins with a song: ‘Helan Går’, which roughly translates to ‘drink the whole thing’ – referring to the shot of Snaps provided with the meal. Only once this song is over, can you begin the meal – of course singing comes before food. At my first gasque I was quite taken aback by the speed and vigour with which the Swedes around me proceeded to tuck into their dinner, but I soon realised that this was purely practical as, just a few minutes later, the next song began. This was followed by more Snaps, more speedy nibbling of food, more singing, and always more to drink!

Although at first it seemed quite terrifying to try and sing along with the natives in Swedish when all I could really say was “hej” and “tack”, it really only took me three or four songs (and three or four drinks) before I was singing as loud as any of the others. Fortunately, the most important thing at gasques in Uppsala is for everyone to have as much fun as possible, so nobody seemed to notice my less-than-perfect pronunciation (or tunefulness), which definitely lifted my spirits! The Swedish sense of humour certainly came into play with some of the songs, which have sudden, vigorous actions or surprising sound effects that clearly confused the international students such as myself. My Swedish table partners had a great time trying to explain to me when I ought to bang the table, which lines ought to be shouted instead of sung, and the ‘corrections’ to certain songs that made them a little more humorous to an audience of ever-so-mature students… (I’ll say no more).

Singing is very deeply-rooted in the traditions of the student nations, and it is not only guests at gasques who get to join in. The workers from the kitchen and serving teams present their own songs at the end of the dinner, which are usually well-known songs with modified lyrics so as to reflect the occasion and which always raise a laugh from the guests. Whilst a majority of these songs will, indeed, draw from more traditional tunes, I was once treated to a fantastic rendition of “I Will Survive” by the serving team, which left most of the room with tears (of laughter) in their eyes. 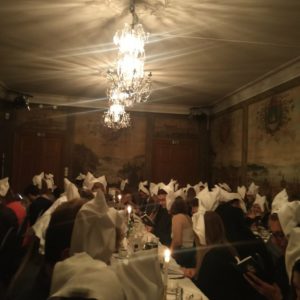 Some of the Swedish songs have fun and strange traditions, such as making a hat out of your serviette and waving it around your head!

You might be wondering how new students at Uppsala could possibly be expected to know a whole dinner’s worth of Swedish songs by heart, but have no fear! Each of the student nations has their own special songbook that contains all the songs you will ever need (and a few more). An important Uppsala tradition that must be observed by all students, new and old, is to share your songbook with your neighbours at the table towards the end of the night and write messages to one another. It might be thanking them for their company, complimenting them on their outfit, or writing down the funniest moment of the night so that they never forget it. UNDER NO CIRCUMSTANCES may you read the messages left to you on that same night! You must instead follow these instructions: put your songbook away, carry on partying, drink far too much and stay up far too late with all your new friends, dance, return home at a ridiculous hour, and wake up feeling terribly exhausted, and hungover. This is when the magical power of the songbook is at its most powerful. The greatest hangover cure I have ever experienced is opening up my songbook, and reading the funniest, sweetest, silliest and most random messages left there by my brand new friends the night before. 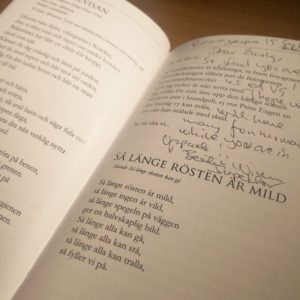 It’s important to write messages to your friends and dinner neighbours when you go to a gasque, and it’s a lovely memory to keep

As you can see, the singing Swedes have made a lasting and joyful impression on this international student. I hope you will make sure to reserve judgement from any Swede you encounter who seems reserved, shy, or disinterested – at least until you sit them down with a songbook and a glass of Snaps, and see what happens.