Class trip to Dorset – By Halie

“What are you doing in the UK?” the border patrol officer asked me as I handed him my passport. “I’m on a fieldtrip with my Paleobiology class from Uppsala University,” I replied. The officer dully and sarcastically chuckled “thrilling” in response before stamping my passport, handing it back, and yelling “next!” to the long line of people behind me. I quickly grabbed my passport and shuffled on my way. I couldn’t help but ponder the officer’s less-than-enthusiastic response. Before coming to Uppsala, I signed up for the “Principles of Palaeobiology” course solely because of the fieldtrip to Dorset, UK. Being a neurobiology and pre-medical student from the United States, fossils and rocks were an entirely new territory for me, and as the fieldtrip quickly approached, I became skeptical as to how thrilling a weeklong trip focused on fossils could really be. As I continued through the airport, I apprehensively hoped that the trip would be more exciting than the tone of the border patrol officer.

There were 13 people total on the trip: 8 Uppsala students (3 Swedes, 3 Brits, and 2 exchange students), 1 professor (Graham Budd), 2 postdocs (one at Uppsala, the other at Cambridge) and 2 Uppsala Ph.D. students (both from Greece). Once we retrieved our luggage, we split up into two rental vans, with both of the Ph.D. students driving. On the day we arrived, we drove from the Gatwick airport to our accommodation at Whitechurch Farm in Dorset, stopping at an English pub and to see Stonehenge and Jane Austen’s house along the way. From the enthusiasm of Graham as he explained the history behind each stop, to the quaint and cozy feel of the pub and the amusing mix of classic rock and Greek rap music in the car, I already knew that the patrol officer could not have been more wrong. 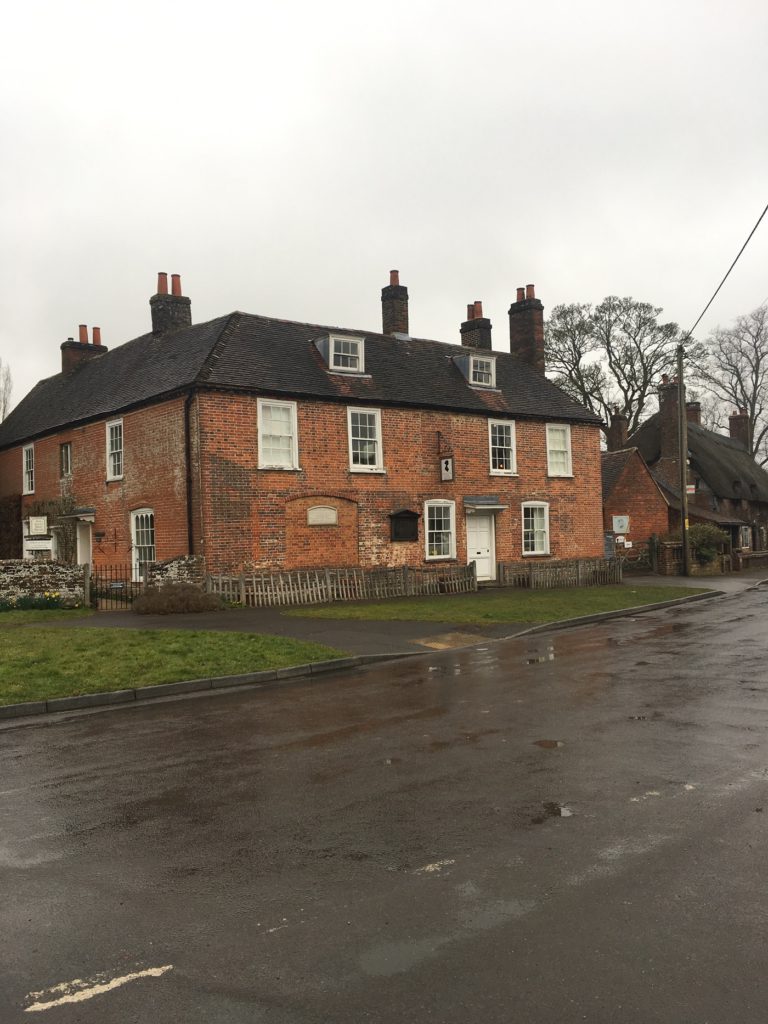 Each day started with a group debriefing of what to expect that day at 9:00 am, after which we all piled into the vans with our backpacks full of hammers, hardhats, notebooks, pencils, and plastic bags for collecting fossils. In one day, we would visit 2-3 outcrops, or areas of beach with rocky cliffs. Here, we would draw the rocks, identify their characteristics, look for fossils, and try to recreate the prehistoric environment. We often ate a packed lunch on the beach, with the occasional pub lunch where you had the opportunity try the infamous British fish and chips. After lunch we visited more outcrops and then headed home around 6 pm to cook dinner and end the day. 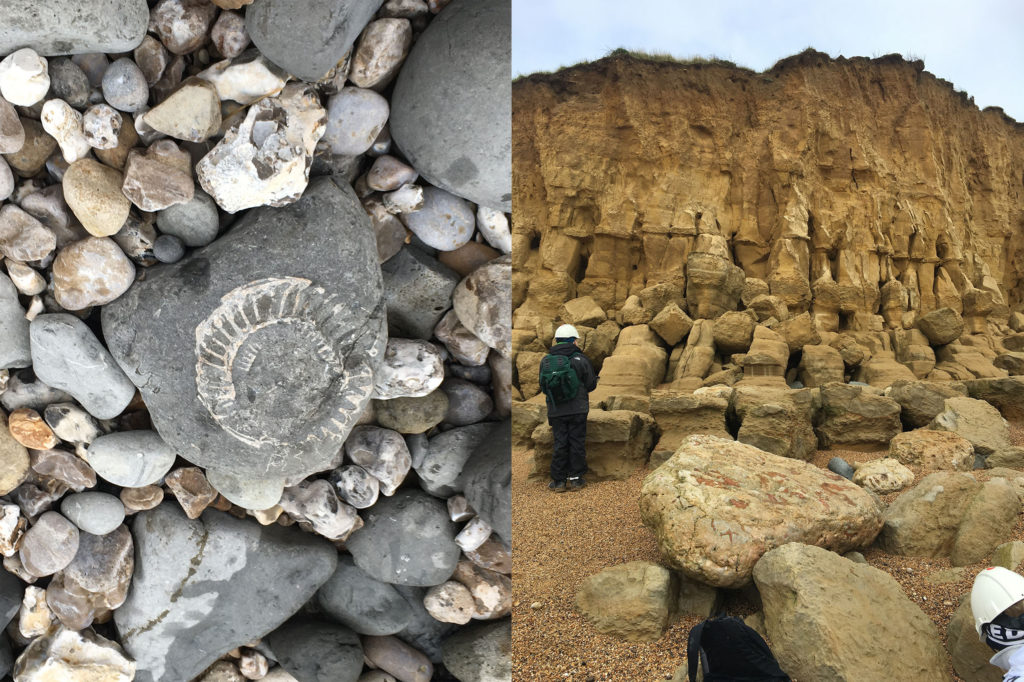 My favorite outcrop of the trip was one known as Durdle Door. In addition to its fun name, we got lucky with the weather at this outcrop, as the sun was shining, and it was a comfortable 15 degrees Celsius, making the beach and landscape quite lovely. Here, we did mapping, which entailed drawing a detailed map of the rocks that depicted their characteristics and their transition between time periods. Often the beaches we visited entailed more than a casual stroll down a boardwalk. They required climbing down steep slopes, maneuvering along rocky edges to avoid wet boots, and tiptoeing through mud. Yet, these adventures were rewarding because it meant that we were visiting non-touristy beaches whose natural beauty was still untouched by man. At Durdle Door, we ate lunch on the shore of a small coastal inlet with still blue water and flat stones, the perfect combination for skipping rocks. Since the sun was out this day, we all tried to make up for our vitamin D deficiency that developed in the Swedish winter months. At the end of this outcrop, we hiked up a large hill where we experienced breathtaking views of the coast – the kind of views that make you realize how incredible it is to be alive. 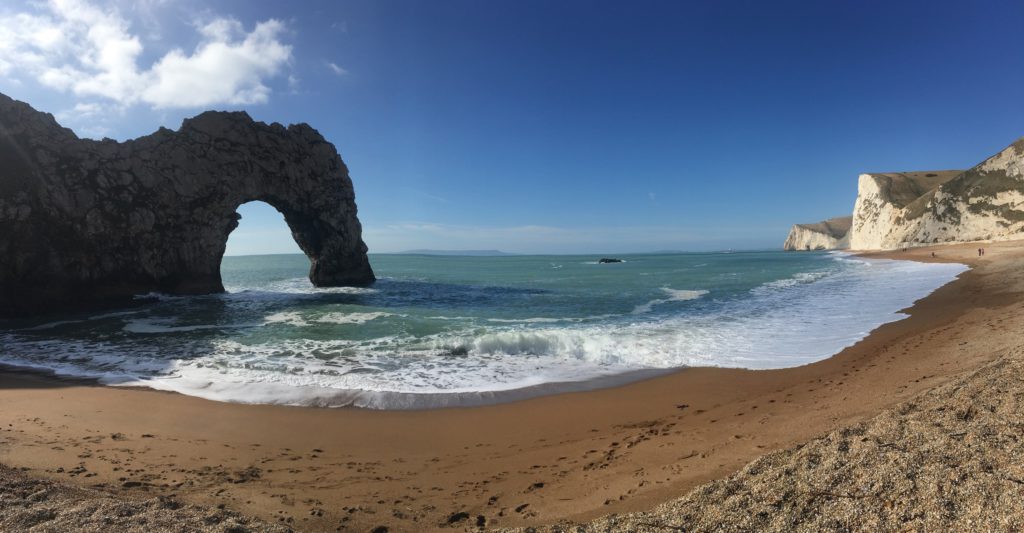 Panorama of Durdle Door arch and the beach

Left: Coastal inlet where we ate lunch
Middle: Rock bedding at Durdle Door
Right: View for the top of the hill

It is impossible to capture the essence of the entire trip in just one blog post. The endless laughs in the car, the shared experiences at dinner, the cozy dinners in the pub are all memories that will last a life time. While I may not be pursuing a career in paleobiology, I have a new appreciation of rock formations, authentic British lingo in my vocabulary, and, most importantly, twelve new friends who shared the same Dorset adventure!