“Do everything you can, you are citizens of your country… Sweden remains a strong pillar of multilateralism”

Undoubtedly, one of the most famous professionals with ties to Uppsala is Dag Hammarskjöld (1905-1961). Famous for his unyielding service as the second UN secretary General from 1953 until his death, he was awarded the Nobel Peace Prize, worked extensively in peacekeeping initiatives through preventive diplomacy, was a non-partisan member of the Swedish Cabinet and had a fondness of words and poetry. His legacy is one of commitment to the world and, with it, a high standard for all of his successors. 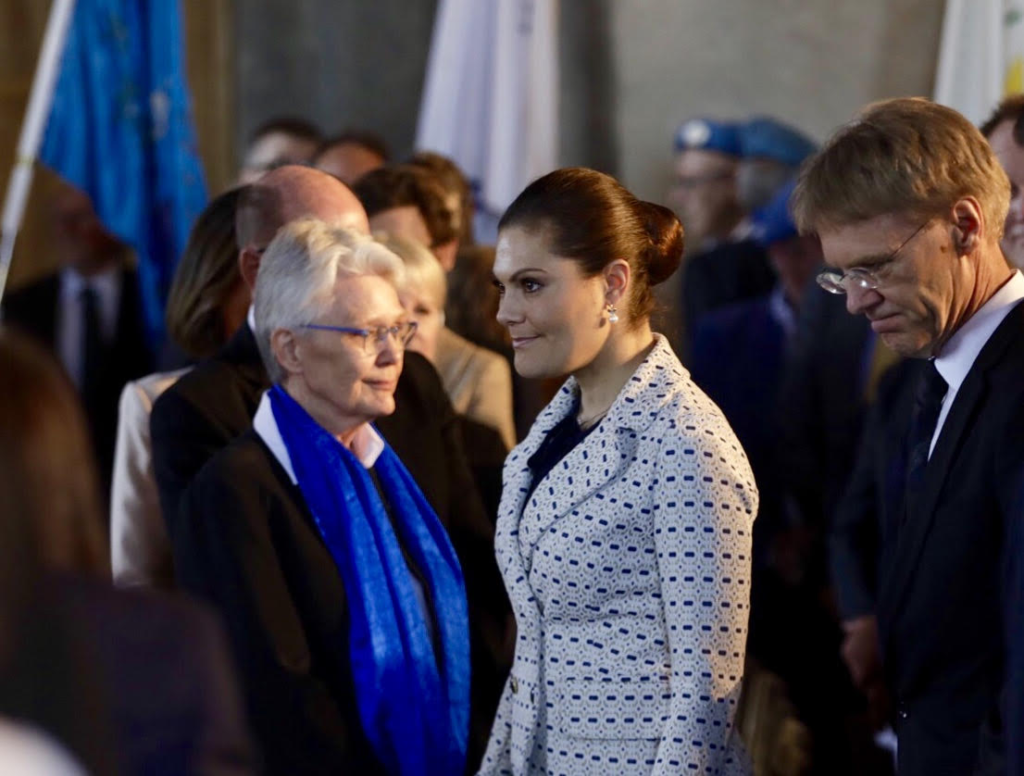 Each year Uppsala holds a speech in his honour at the castle, inviting a speaker who represents all the values that Dag Hammarskjöld fought for throughout his service – “compassion, humanism and commitment to international solidarity and cooperation”. The 2018 lecture invited the current Secretary General, António Guterres, to the stage, and it was not without a great deal of social and political interest. 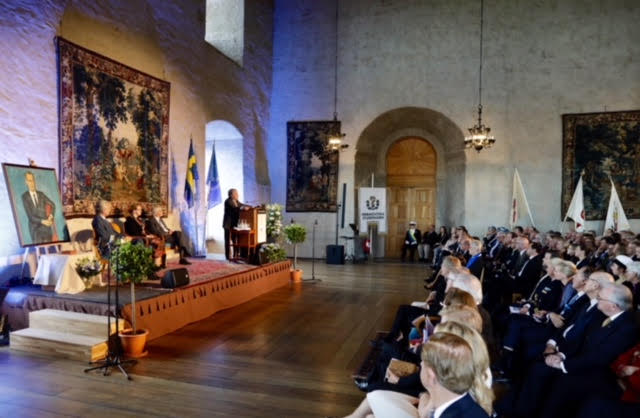 On 22nd April, many Diplomats from around the world attended, as well as senior members of Uppsala University, members from the Swedish parliament, UN employees, students from the Peace & Conflict department and, most notably, the Crown Princess Victoria (pictured above).

Born in Lisbon, Portugal, Mr. Guterres is widely renowned for his humanitarian concerns and work to reduce human suffering. During his time as Prime Minister of Portugal he made a considerable effort to assist East Timor in the wake of their conflict through international aid. Later, in his time at the UN, he worked closely with refugees and displaced families throughout Yemen, Iraq, Syria, South Sudan and the Central African Republic. 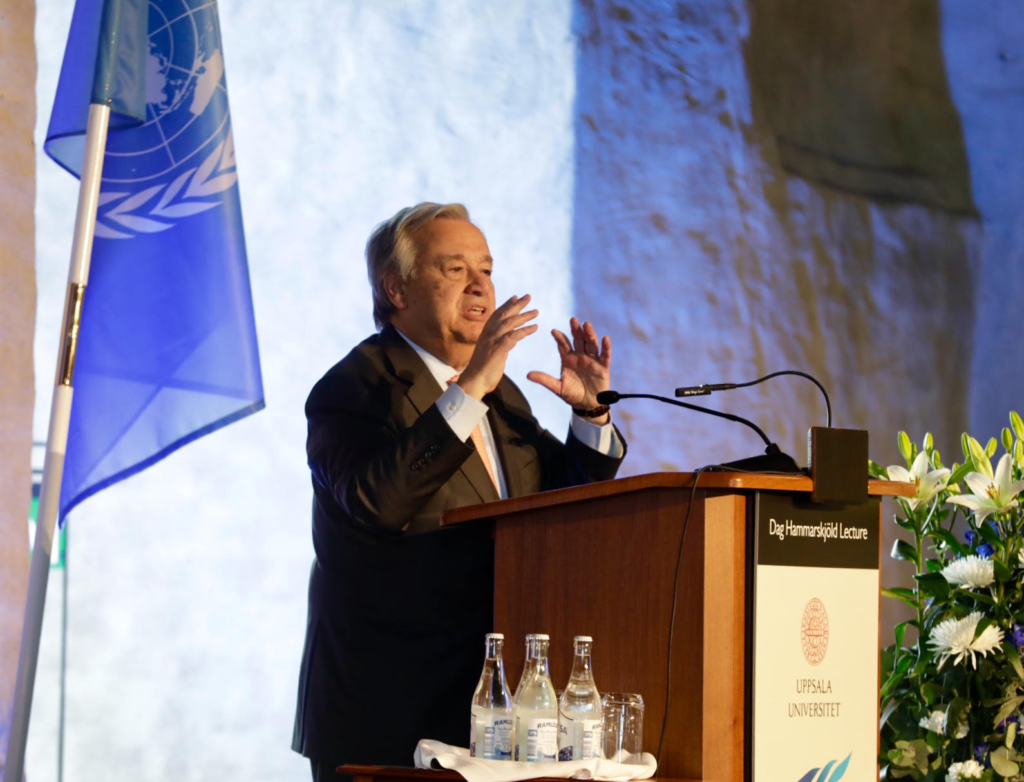 A very Swedish welcome. The room was adorned with flags, flowers and a painted portrait of Dag Hammarskjöld. In careful succession, all audience members arrived, led by flag bearers and seated according to their role and relative importance. António Guterres was introduced with a warning that “there won’t be enough time for everyone to take a selfie”.

Addressing the room, Mr. Guterres made references to close ties the UN has with Uppsala University (as the oldest University in Scandinavia) and its students, painting an inclusive and wholesome picture of those who strive to find their way in life by keeping the country united, keeping their “eyes fixed on the far horizon”. He paid respect to the memory of Dag Hammarskjöld, “a personality that best represents the UN… the values that he fought for… [a] man of action, a sophisticated diplomat and a man of culture”. Noting that culture and poetry are things missing from the political world these days.

More than ever before one world is what is needed”. It seems that 20-30 years ago people were optimistic and globalisation was seen as prosperous, however optimisation is short-lived, now we face increasing inequality and insecurity, losses in human mobility, divisiveness and poverty – people’s trust in political institutions has dramatically been reduced. In addition, he noted that conflict is seen never to die, now we face a more complex set of conflicts with new threats of global terrorism and hope for meaningful resolutions.

Cyber warfare, for example, and the barrage of artillery is now replaced by the undermining of defence systems. We need to be able to apply the Geneva Convention to cyber war, to be sure that AI is used for the benefit of humankind and address ethical questions regarding genetic engineering.

Mr. Guterres noted an increasing threat of a rebirth of the cold war, a war divided ideologically and politically, with the need for mechanisms to support dialogue so that risks do not spiral. How can we make bridges and support refugees from Syria and address threats like the Iranian nuclear program? How can we address the Israel-Palestine problem, when it is evident that a 2-state solution is not possible? 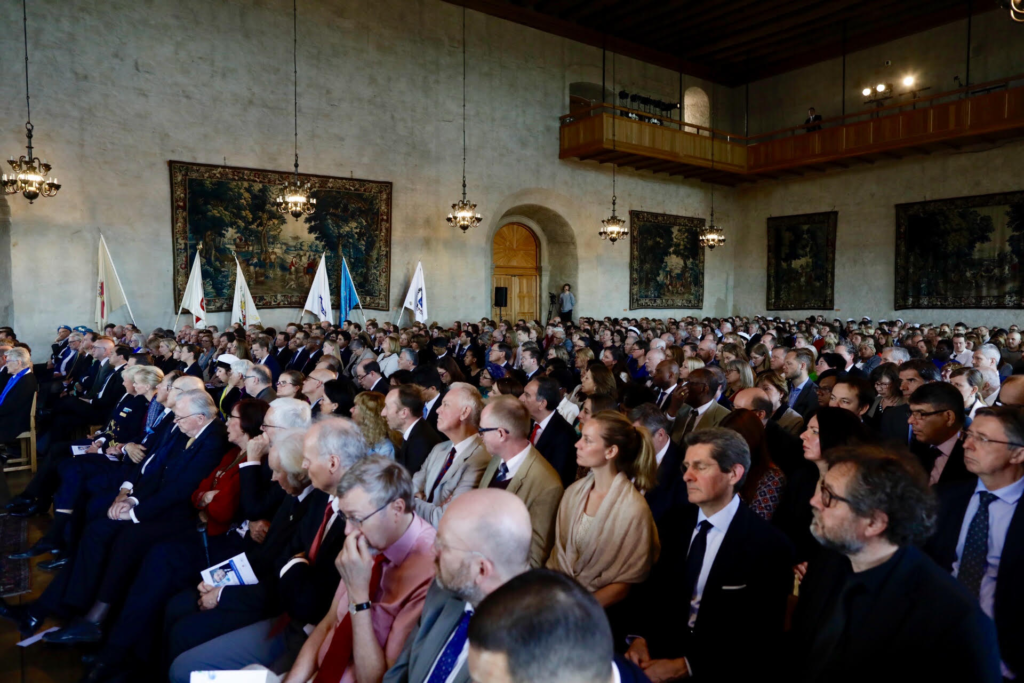 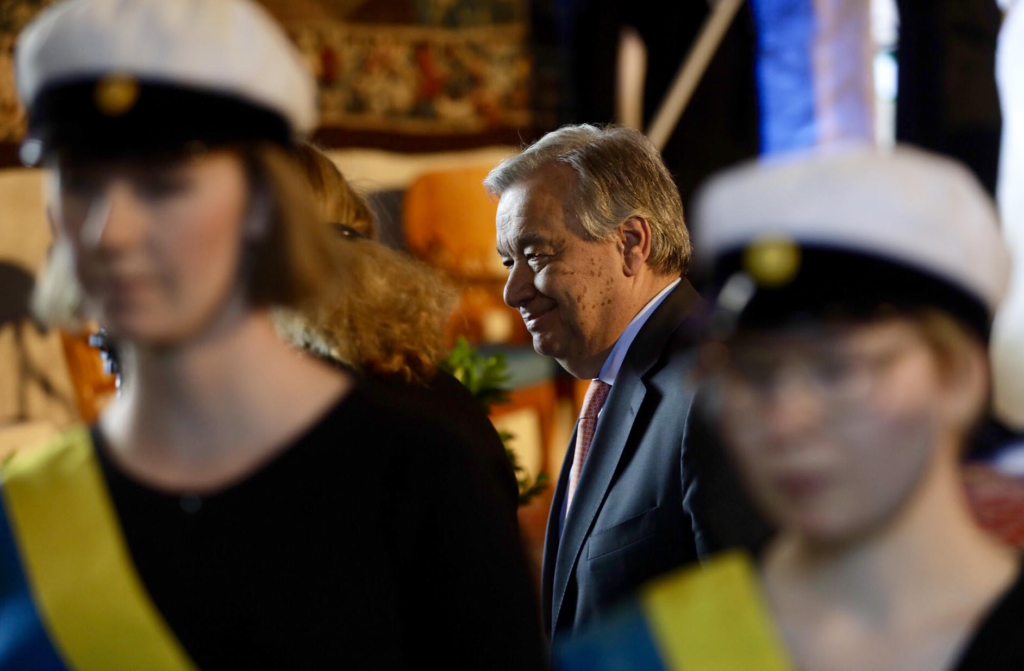 In relation to climate change, he stated “we cannot afford to lose this race” as the effects would be “devastating”. Sweden has shown great consistency in its efforts, but more is needed.

Ending his lecture, António Guterres touched upon the troubles faced by Rohingya muslims in Myanmar, the serious discussions surrounding Yemen and the electoral needs of the Democratic Republic of Congo. He renewed his belief in open borders for human mobility, acknowledging that Europe could work better in this way, especially in its organisation – “when something is necessary, it is good that it is well organised”.

A powerful and moving speech, António Guterres directed his attention to the most prominent issues facing the UN at this time. As this took place six months ago, I can’t help but think how that speech would be different if given today, demonstrating how volatile and fast-moving our current political climate is. Avoiding talking about Trump directly (something that is notably hard in today’s society), Mr. Guterres roused motivation and self-worth in the students who attended, making them believe that the youth has a voice that can make a difference. That, really is the best message we can take away as members of the next generation.