Unexpected things about Valborg 2019 – By Huiyu

Everything starts from a window view. A window of building 34 Rackarbergsgatan (near one of the main event locations, Ekonomikum Park) broadcasts a non- stop live streaming for 2019 Valborg. Standing in front of this window, I had observed the city from the preparation from 26 April to the beginning of getting crowded on 30 April until getting back to normal on 1.May. No matter who you are, old, young, sober, drunk, single, couple, students, tourists……, the unexpectedness of Valborg proves its credible fame that Uppsala is worth it.

Though Uppsala is a student city, Valborg is definitely not for students only. The first time I checked the programs, I came out with a question, “What are those adults and children do with Valborg?” Because from my preliminary understanding, everything surrounds the student theme: drinking alcohol, student race, throwing graduation caps, student performances, student night club. However, in these events, I noticed children and adults equally enjoyed themselves as students. 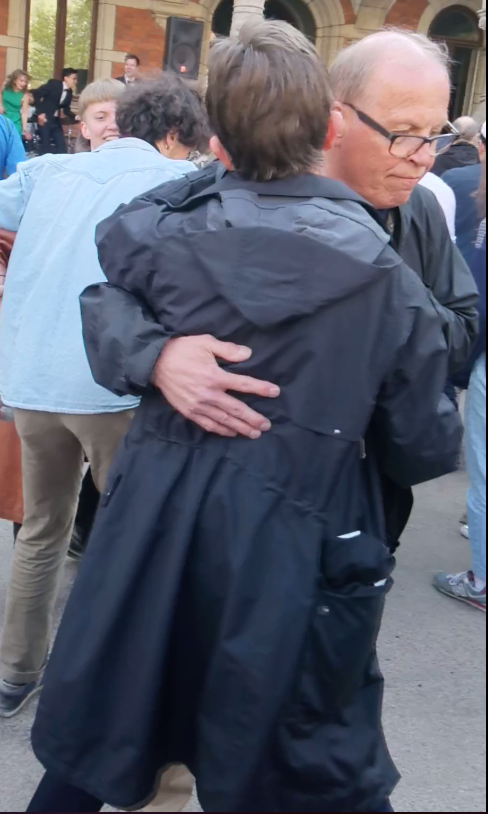 Along the Fyris riverside, while the raft race is going on, the main cheerleading team is from family with kids sitting behind the railing and shouting for the passing boats. Once their energy is used up, at two sides of the river, sweets and toy vendors are on standby. In the long queue, I always overhear intimate dialogues between families. In exchange of children’s proper behavior during an entire day, a box of churros, a funny design of balloon, an ice cream seem to be a very cheap trade. In such a sunny day, which parents would not want to take advantage of the free occasion as a precious family one-day trip? 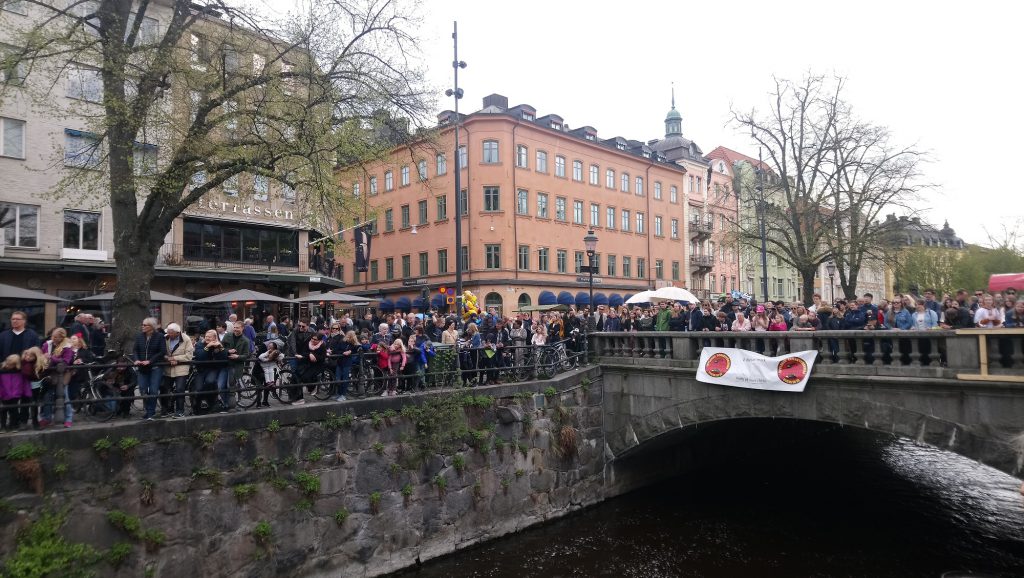 Turning back from Fyris and going up to the main library, Carolina Rediviva, people will notice posters are all replaced with Swedish national flag. The countdown board arranged on the center of the façade predicts the grand opening of the ceremony at the following hours. When it is three o’clock sharp. People take out their caps and wave at the air according to the order from the main speakers. Among the white caps, it is not hard to find some beige color. Their owners are some old couples or friends. The beige color somehow symbolizes those fresh student lives in the past as gorgeous and impressive as what I am experiencing now in my exchange year. That is the moment I am pretty much touched for I feel the tradition deeply connects the people from different regions and ages in this particular time and place. Two of my interviewees from Gothenburg and Uppsala told me, “Valborg is good for bringing tourists to witness our tradition.  For example, the last song sung by the choir in the ceremony has 200 years old history.”

In front of Norrlands nation, the street is full of happy dancing pairs. What amazes me the most is several senior couples. They hold their lovers’ hands, wave their bodies while following the melody from the live jazz band and singers.  Compared to us such a group of young people who just stand and behave a bit shy, they are so chill and enjoy the moment. “Look, on the roof, there is another senior couple, standing there silently and watching their comrades downside. What a life!“

Valborg in Uppsala is the biggest spring celebration around whole Sweden. It always attracts a big crowd of people to come and gather in the town. Where there is people, there is business. Valborg in Uppsala is like a carnival, so the price for many things are raised during the celebration, which are not necessarily correspondent to the quality a person can get from the normal day.  Access to many nation events also require entrance fee. Therefore, to distinguish a student identity with a tourist, many people bring their own food to the picnic area or spend time at night at the home party.

When I associate Valborg with a carnival, I always imagine it is a day full of activities. Yes, it is, but it is not as well. If you check the schedule from the morning to the midnight or from preparation period to Valborg day, you do see many proposals: gasque, champagne picnic, race, food, nation party, ceremony and speech, choir performance, and club. However, if you enter each occasion, you can conclude two or three similar patterns: People gather, spend time together, eating, drinking, and moving. Especially, in such a small town, the popular places to afford people could be numbered easily by fingers. Friends or acquaintances you know just take turn wandering around these places. Occasionally, I bumped into several friends and we exchanged our daily itineraries, the first one is pretty much the same even to the tenth one. If a foreign student sticks to one group of people from the morning until night, I wonder what else can they still talk about? 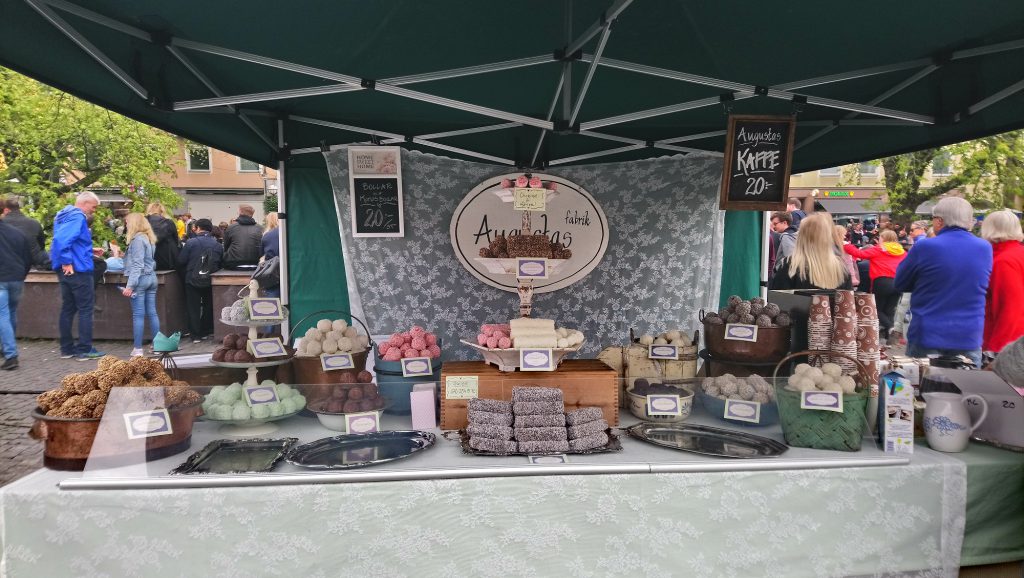 When certain number of people gather, there is a possibility to have chaos. On Valborg, the city shows its well preparation and experience to the major two chaos: security and trash.

The massive trash mountains at Valborg night is very frightening. Streets are full of bottles. Main parks or picnic areas are covered by plastic bags, food packages, and clothes or blankets. At the first sight, I could not make a conclusion whether this is about Sweden or human being. When alcohol starts working, the position of environmental protection becomes so little, even for the most environmental friendly country Sweden. It is until the second day around ten o’clock, I was once again shocked by the scenery from my window. The city is as clean and quiet as the other day before Valborg. At several places, I met some people wearing the yellow vest of Uppsala Council. They are high school students, football team, scouts, and others directly hired by the city council. In order to earn training and traveling fund, allowance, or out of responsibility for the environment, or another ironic way to cleanse what they did last night, they start the cleaning task from 7 or 8 to 11 to 12. In other words, if Valborg events end at 4 in the morning, around half a day, their mission is completed. From a participant of the cleaning task, there are 20 teams like this working on returning the city appearance. To face the massive trash, though they comment the amount is less than last year, I could not help but praise the organization and efficiency of Swedish government. 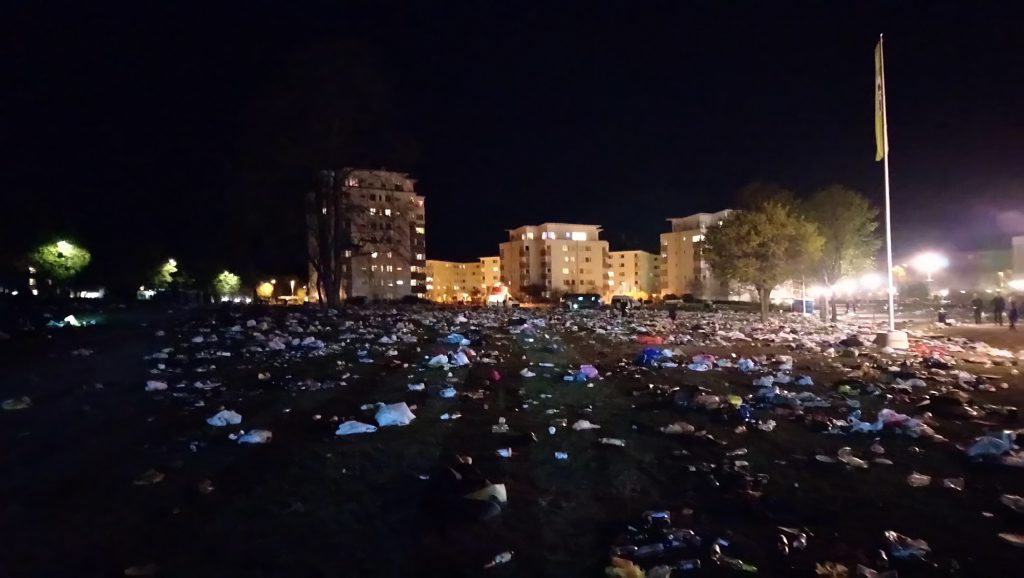 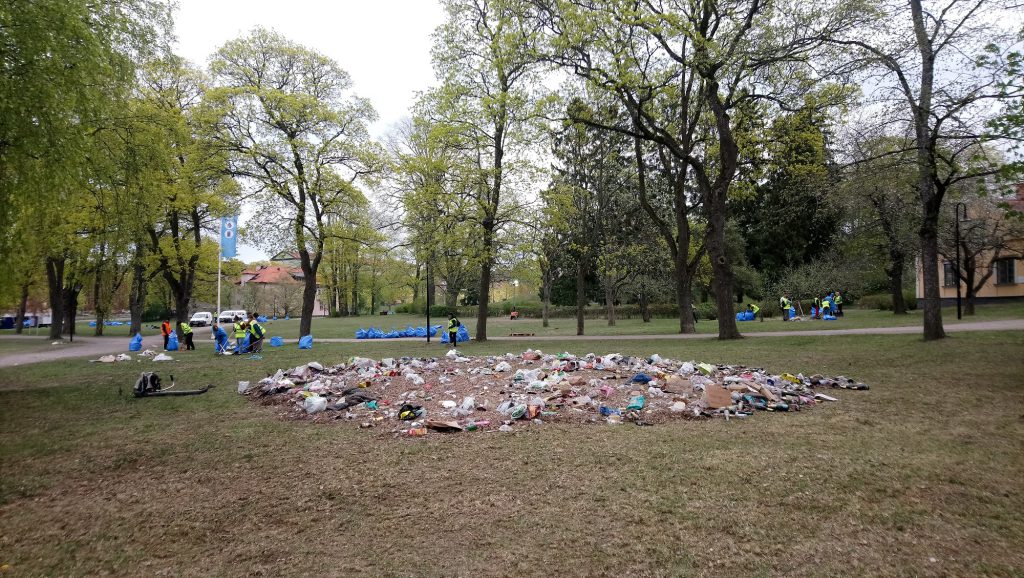 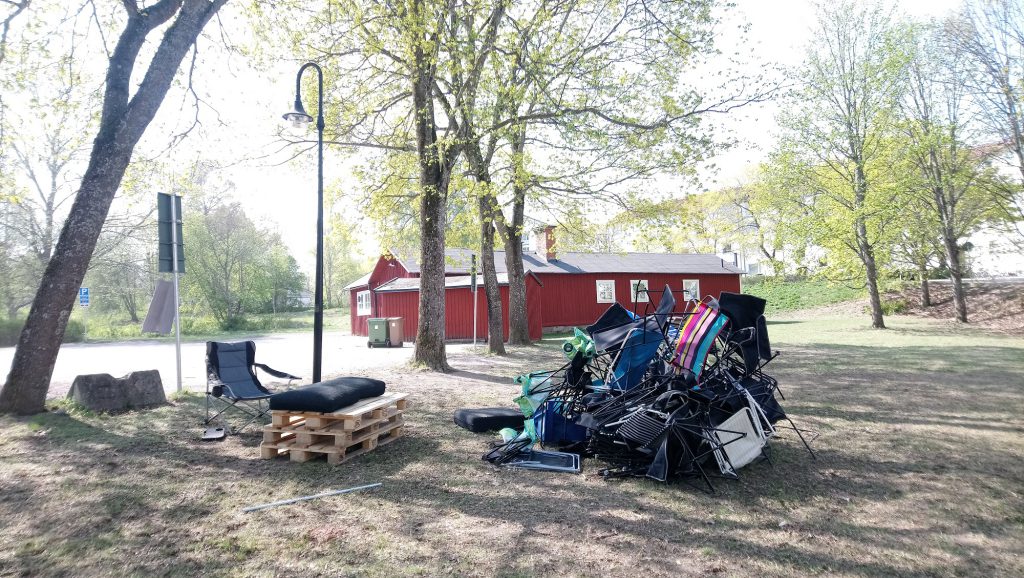 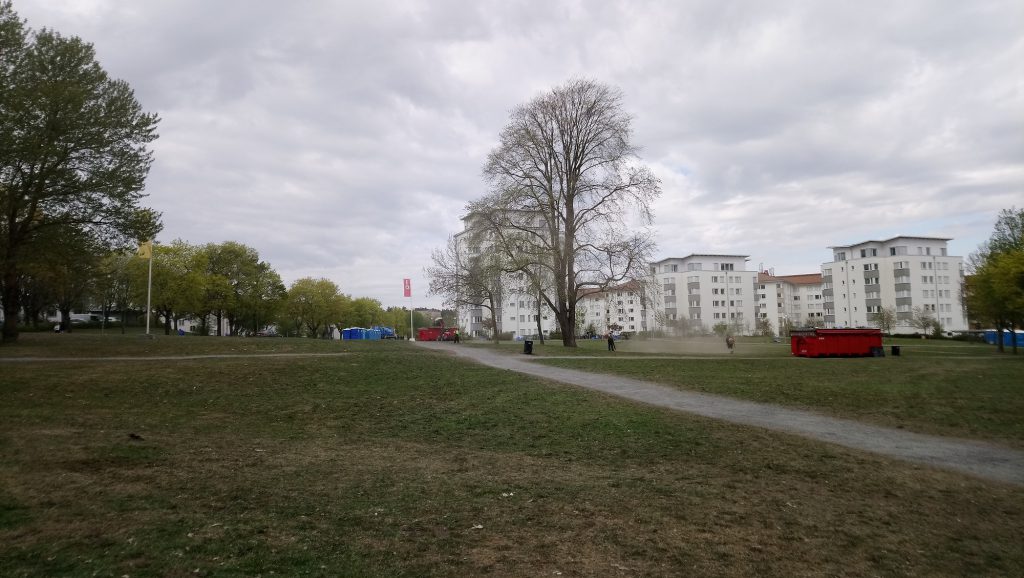 As terrorist attack has become a normalized phenomenon in many European cities, security force has always been alert for any kinds of assembly. On Valborg, in addition to the guard at the entrance for nations, around the main celebration venues, polices and ambulance cars are visible, which is not a common scene in Uppsala, but for the sake of the safety of the most safest city, this is necessary. Only under this level of confidence to the security, we do not need to worry about anything during the celebration. Just like the random keys I founds on the bench, they are still there waiting for their owners even until the second day.

“Heavy drinking is a student thing, but it is allowed. It is a process from a student to a grown up. One day when we look back, we remember we did something crazily together, and it is okay because we are allowed to do something on Valborg for something we might not do on the other day.” 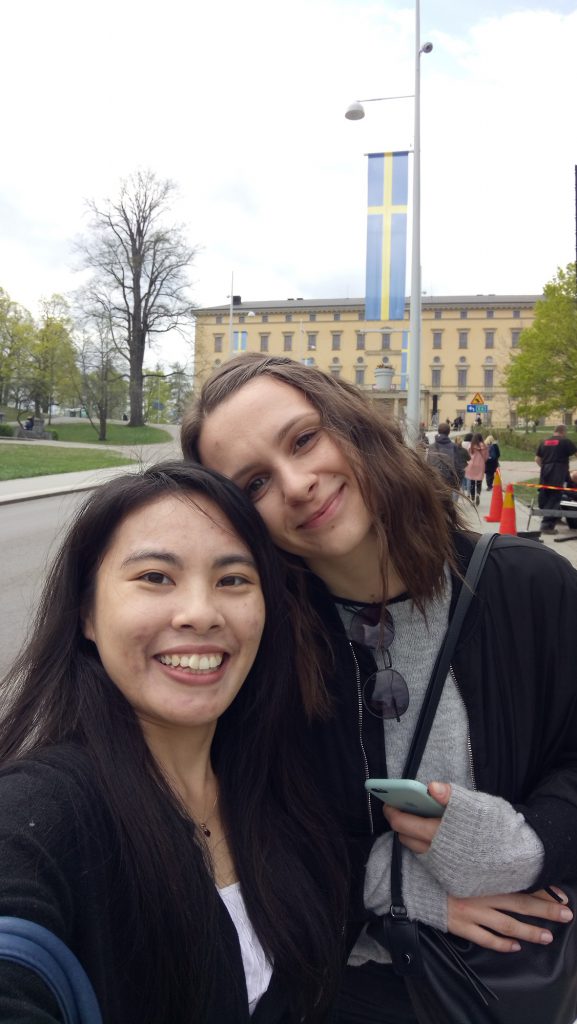 For a student, Valborg is an exception…..of certain taboos or a normal way a student lives. It is also a highlight of the student life and of the friendship we vow to protect and cherish forever.  2019 Valborg, I was spending my time with my dear friends who I met for the first and second arrival weeks in Uppsala. I remember that kind of loneness and uncertainty when a person came to a new environment, but because of such a company, we have gone through so much hard time. Until now it is probably our last month in Sweden. No matter what we did, at the castle, at club, at nation pub, at the ceremony, on Valborg we celebrated the coming of spring and also the most quality time of just being together. To friendship, Skål!