If I say the words “northern light” what do you think about?

You think about this kind of green waves in the sky that you saw in picture or video. If you are a normal person then you should find these so beautiful that you absolutely want to see it at least one time in your life. It is the same for me but my probability to see northern lights where I’m living in the south of France is near to 0 %…What a surprise! Moreover, I heard that even in the north, northern lights are a phenomenon very rare and that many traveler’s hopes were broken by clouds or a low sun activity. So it sounds like you have more chance to win the lottery than see northern lights.

Nevertheless, when I came to Uppsala to study and saw that we had the opportunity to visit Swedish Lapland then I said to myself “Why not?”.  So, we organized with my friends a trip to Kiruna in Swedish Lapland. We planned to do many activities like snowmobile and sled dog and everybody said that norther lights were a bonus and that it won’t be dramatic if we don’t see them. However, the reality was that we all hope to see them, but we didn’t accept it to not be disappointed if the sky doesn’t turn to the green.

The first think to take care is the weather, because if there is cloud in the sky you won’t be able to see anything, except if you can fly above them but I doubt about it. Nevertheless, as the sun activity, the weather is not a data that you can predict because we can not really trust the meteor channel, mainly if the weather forecasts change in function of the channel. So, when we arrive at Kiruna the February 28, the first good point was that the weather was nice! The second one was that many persons living there told us that the weather forecasts predict hight sun activity. Our hope increased.

When the night fall, the camp director told us to keep an eye outside to be able to detect any green lights. I listened him and stick my nose against the window, looking for any signs. At this moment, two of my friends decided to go to the sauna and proposed me to go there too. I told them that they are crazy. How could they manage to observe northern lights if they are enclosed in a sauna? They told me that they will be able to go outside in undershirt if they saw northern lights through the sauna window. I will never know if they were be able to do that because when they return they told us to take a warm coat and go outside. I had never taken a coat as fast as I did this night. When we came outside we saw green line in the sky. We hear people scream “Northern lights!” to warn everybody. 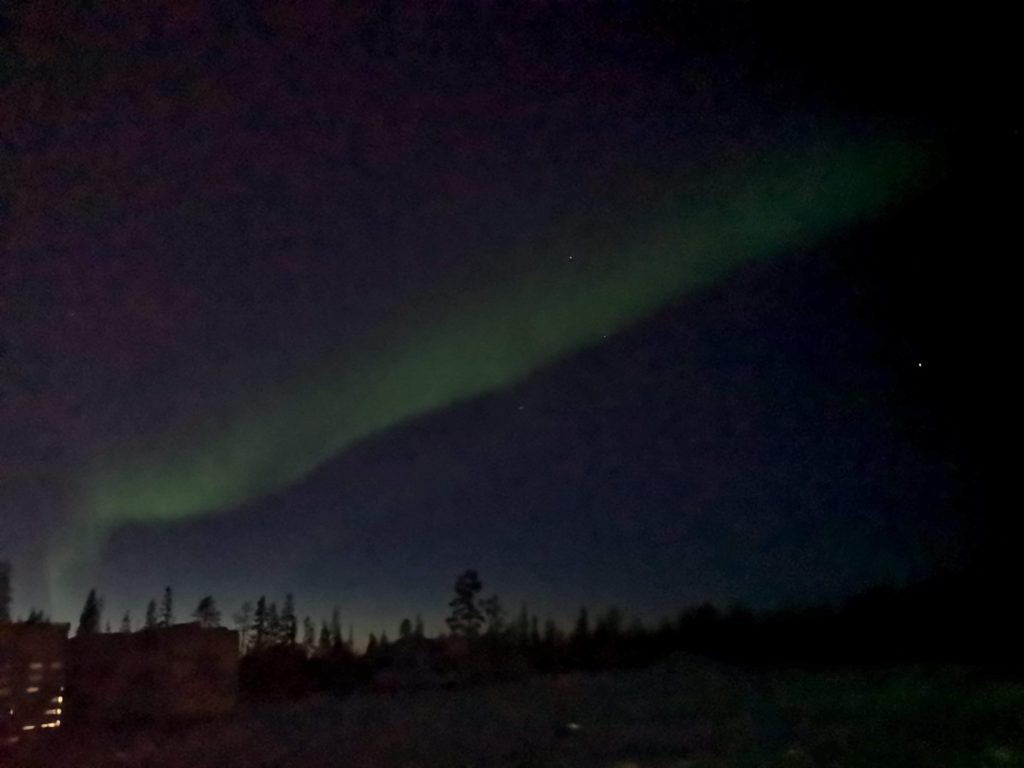 Even if it doesn’t look like we saw in picture we were so happy to be able to see it, even if it was small. But the line starts to increase and cross all the sky like a huge rainbow. Few minutes later, these green lights covered a big part of the sky. We could move our head in all the ways to see different forms like a tornado or a cyclone 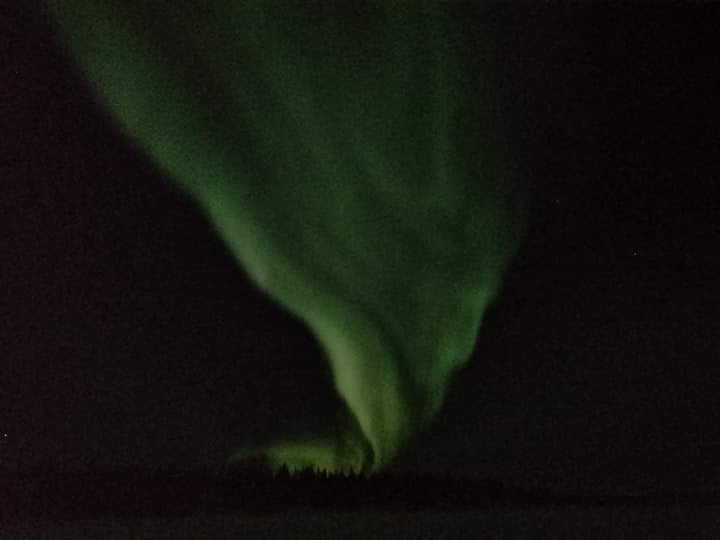 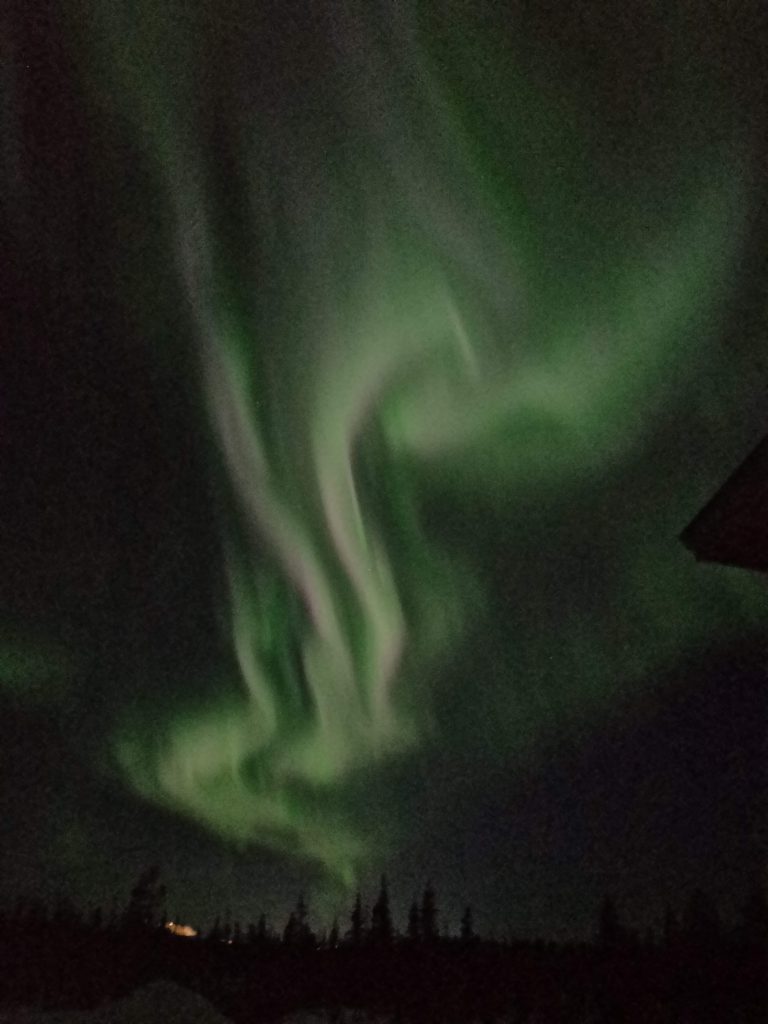 Obviously, when you are the witness of a show like this it is difficult to not take your camera to capture these green lights. Then we assist to a paradox because in one hand we think that we should better to enjoy the moment rather to use our camera but in the other hand we know that we assist to a very rare phenomenon and we want to capture this moment.

By the way, we are not equal about the camera level. Some people have already prepared a fix professional camera long time ago before the northern lights arrived while some people like us just use smartphones. The challenge was to manage to take a photo of us with northern lights behind us to prove to everyone that we saw them! The strategy was to light the person while another person takes the photo.

When the Instagram photos and the proves were done we were ready to come to our mobile home when someone scream “Look! it’s turn to pink!”. We look at the sky and effectively a little pink color appeared in the green light and the whole start to move like a dance. To be honest I was too chocked by the beauty of what I was seeing that I have difficulties to remember the scene well.  After this, the northern lights started to disappear like a firework after the final show.

We came back inside and while we were cooking pasta we repeated all the time “We saw northern lights”. We had difficulties to realize what we have seen. Some people in the camp told us that it was a dream for them to see northern lights. That’s it, we assisted to a dream which came true for some people.

So if you share the same dream, tell yourself that is not impossible because if a simple student group in week end at Kiruna managed to see them, you could manage as well!